‘Beautiful failures’: the disturbing power of the art of the Troubles

After years of censorship, controversy and caution the Ulster Museum is staging the first major retrospective of Troubles-related art 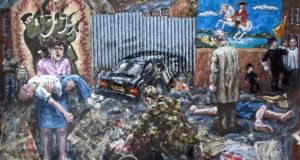 The Other Cheek? by John Keane; Ulster Museum collection 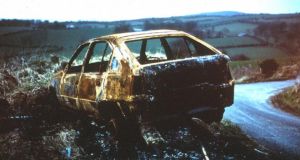 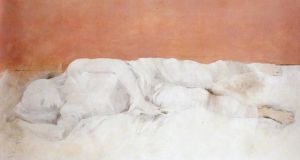 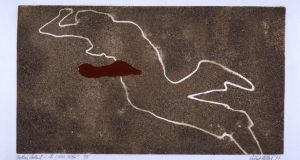 The bronze woman has been flung on to her back by the force of the explosion: legs splayed, arms contorted, face obscured. Frozen in the eternal moment of the blast, everything about her has been radically disordered. She has been turned upside down in every sense, her privacy and dignity violated, the humanity knocked out of her, and yet she couldn’t be more pitifully human. Your eyes want to look away as much as they want to look, and then look away again.

This sculpture by FE McWilliam – part of a series of five pieces created in response to the 1972 bombing of the Abercorn Tea-Rooms in Belfast, in which 130 people were injured and two women were killed – is the first thing you see when you walk into the new Art of the Troubles show at the Ulster Museum. Although familiar to many – the sculpture stood in the old entrance hall of the museum for years – it retains its disturbing power. Now it takes its place alongside 60 other works by 50 artists, some of which have not been seen in public for decades, in the first large-scale retrospective of Troubles-related art.

Alongside McWilliam, the well-known figures you might expect to encounter are all present – Joe McWilliams, Willie Doherty, Paul Seawright, Jack Pakenham, Michael Farrell, Richard Hamilton, Robert Ballagh – as well as other, less immediately recognisable names, or names that would not spring to mind as Troubles artists, such as Louis le Brocquy, TP Flanagan, and even Gladys Maccabe, better known for her tender landscapes and still lives. Here she has a single painting, Bomb Blast in Ulster , the wreckage of the car evoked in a twisted knot of thick black lines.

Not before time: that is the response from many Northern artists when you ask them about the exhibition. The Ulster Museum has an unfortunate history when it comes to showing controversial political art. In 1978, attendants at the museum refused to hang a number of pieces in Art for Society , a travelling show curated by Nicholas Serota – now director of the Tate – from the Whitechapel Gallery in London. Among them was Silver Liberties: A Souvenir of a Wonderful Anniversary Year , Conrad Atkinson’s outraged response to Bloody Sunday, and Joe McWilliams’ Com munity Door , featuring a petrol-bombed door from a community centre, blistered and blackened from repeated attacks, woven through with an incongruously cheery rainbow motif. The staff’s “work-to-rule” action was supported by the museum’s trustees, and caused a stand-off with the Arts Council of Northern Ireland, which described it as “a denial of creative freedom”.

A sense of caution has taken the place of the impulse towards censorship. When the museum reopened in 2009, after a €21 million refurbishment, there was disappointment with the new permanent gallery dedicated to the Troubles. Plans to exhibit bullet-riddled boots and the shirt worn by SDLP founder Gerry Fitt when he was bludgeoned with a police baton at a civil-rights rally, as well as other evocative relics and artefacts of the 1968-1998 conflict, were shelved at the last moment. They were replaced with a careful, text-heavy display – and not a single artefact in sight. By the museum director’s own admission, it was “tentative” and “unresolved”.


Grasping the subject
So the decision to reach out and decisively grasp the difficult subject of the Troubles – albeit through the more diffuse medium of art – will be seen by many as a welcome development. There is assurance and confidence in the scope of the exhibition, and the previously excluded Atkinson and McWilliams pieces are now on prominent display.

Why now, though, at this particular moment? Kim Mawhinney, National Museums Northern Ireland’s head of art, says the idea for the show came about as a result of conversations with Wolverhampton Art Gallery, which holds one of the biggest collections of Troubles art in Ireland and Britain. (The exhibition was put together in partnership with Wolverhampton, and will travel there in the autumn.)

Mawhinney also consulted Peter Richards, director of the Golden Thread Gallery in Belfast, which has been running its own series of exhibitions, Collective Histories of Northern Irish Art , aiming to form a significant archive in the absence of a permanent public collection. But the plans were accelerated when the museum received the art collection of the Arts Council of Northern Ireland, and it became clear that – together with its existing collection – the pieces were in place for a retrospective of the period. “It doesn’t claim to be comprehensive,” says Mawhinney, “but what we really wanted to do was foreground the artists’ voices. That was key for us: the individual perspectives.”

Jim McGreevy, director of collections for National Museums Northern Ireland, says the museum is conscious of the unresolved legacy of the Troubles and continuing sensitivities in the community, particularly among victims. “We are mindful that a lot of issues are still raw, and society is still trying to work its way through them,” he says.

Front-of-house staff have received special training from Wave, a cross-community victims’ charity, and there will be a notice at the entrance to the show warning visitors about the nature of the content.

“There was a sense within the museum that we have a social purpose to play here,” McGreevy says. “A lot of us are aware of the Troubles through lived memory, media, anecdotes, but art offers another way in, a softer way in, to some very difficult issues, and it also offers the potential for dialogue.”


Earliest responses
Although not strictly chronological – the works are presented in five interrelated sections – the first part of the show deals with some of the earliest responses to the Troubles. Michael Farrell’s Madonna Irlanda, or The Very First Real Irish Political Picture , from 1977, is here, and so too is TP Flanagan’s 1974 work, Victim , in which a pure-white figure reclines like a loose-limbed sarcophagus. It was painted following the murder of Flanagan’s friend, barrister Martin McBurney.

There is a curious piece called Strata by Tom Bevan, a sculptor with an interest in geology, showing a family sitting down to a meal together, while the earth beneath them is occupied by grinning skulls and, deeper still, a recumbent skeleton wearing an oversized pair of boots.

In the next section, Atkinson’s vast Silver Liberties – based on an Irish Tricolour, with a crude graffito of a British soldier standing between images of people shot dead by the British army on Bloody Sunday – demands attention. Joseph McWilliams’ 1988 triptych, May the Lord in His Mercy be Kind to Belfast , features three city fathers: a chortling Sammy Wilson, Ian Paisley with gnashing teeth, and Peter Robinson, stiff and inscrutable behind tinted blue glasses.

Later, the photographers come to the fore: Willie Doherty, Paul Seawright, Donovan Wylie, John Duncan. The entire show, meanwhile, is haunted by the constant wheeze and moan of an accordion, from Philip Napier’s 1992 piece, Ballad No 1 , in which the instrument is attached to an image of hunger striker Bobby Sands, like an artificial lung or ventilator.

Belfast painter Jack Pakenham says it his role, as an artist, to prick the conscience, to shock and comment and diagnose, and to remind people of the fragility of the peace process. “It’s about time we had a show like this; it’s been too long,” he says. “Everybody’s been trying to paint a positive picture of Ulster, reluctant to show ourselves in a bad light to the rest of the world.”

Others see the show in a more ambivalent light. “Part of me thinks that some of the works in here are interesting failures, even beautiful failures,” says Philip Napier. “They’re trying to say things in a certain language and they can’t quite hold it.”

The idea of necessary failure is also picked up by artist and commentator Daniel Jewesbury. “An indignation and moral panic comes through in a lot of the work, which fails to tell me anything about what’s happening other than that it’s horrible. But to a certain extent this is a necessary stage.

“Now we have to find a way of talking about that whole history in a way that helps us to understand the place we’re in now. I hope that whatever people think about this show, it gives us a point to move on from.”


Art of the Troubles is at the Ulster Museum, Belfast, until September 7th