Awry, synecdoche and vagina: The read-it-never-said-it words that people mispronounce 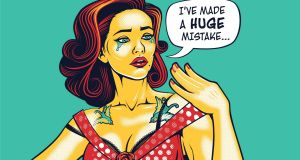 ‘What word did you learn first by reading before you realized you were pronouncing it wrong the whole time?’

Who says no one cares about pronunciation? A recent tweet by Andree Lau @alau2 asked: “What word did you learn first by reading before you realized you were pronouncing it wrong the whole time?”

It quickly racked up 10,000 comments and hundreds of retweets and lots of admissions of pronunciation errors.

The original question, from the @huffpostcanada’s editor-in-chief, was sparked by her son’s friend, who pronounced the word “apply” as “APP-lee” because he was reading it from a videogame menu.

Others quickly got sharing their own read-it-never-said-it moments. Heavily featured were “chaos”, “segue”, “colonel”, “hors d’oeuvres”, “hyperbole”, “epitome” and “Hermione”.

Fatigue: Thought it was fat-ig-you when playing videogames as a kid. – MGoBlue45 @ansky712:

Epitome: The weirdest part is I know how to pronounce it, but whenever I say it always comes out “ep-i-tome” no matter what. – @apatheticVAN1TY

Awry: I did this a lot as I was a bookworm from a young age. I actually still don’t know how to say nonchalant. For some reason I say noc-U-lent. And [I pronounce] awry awwww-ree. – @sapphirecats

Touché: I used to read “Touché” as “Touchy” which made the Three Musketeers seem very sensitive and kind of bitchy. – @petepickerill

Followed by this respsonse: That’s the classical Latin pronunciation, so you weren’t *wrong*, you were just old-school. (Fun fact: In classical times, that word didn’t mean “vagina”. It meant “sheath”, like a scabbard. It didn’t get applied to the body part until the early Renaissance.) – @womzilla

Synecdoche: I said si-neck-dosh at a snobby party in Oxford and everybody laughed uproariously at me. – @jodiekearns:

Autopsy: For some reason, when I was a kid, I got two letters transposed in my head. Thought it was auto-spy. – @DixonTam

Banal: And it was embarrassing. – @nikillinit

But as one person on the Twitter thread reminded us: “Better to mispronounce a word than to misuse it, because that means you read it somewhere.”

Gawping at other Irish people’s houses. It’s who we are
10