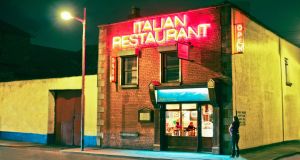 Culture Night 2020 is already a memory but Berlin-based Candice Gordon, rock singer turned Ireland’s first full-time cultural officer for the Department of Foreign Affairs, is keeping the show on the road.

Weeks into her new job in the Irish Embassy in Berlin, Gordon’s new photographic exhibition brings a touch of modern Irish life to the German capital – and online to a worldwide audience.

The exhibition, Ireland in Frame, unites the striking work of six photographers to provide outside audiences with a window into Ireland beyond familiar visual clues and cliches. As pandemic restrictions make one exhibition in one place unlikely-to-impossible, Gordon instead has spread the work across six Irish-owned or operated businesses in Berlin.

Art lovers can apply for a trail card and visit each stop, boosting their stamina along the way with a complementary drink. On Friday evening a socially distanced launch event in the courtyard of the Berlin Embassy brought a local audience together with participating photographers via Zoom.

Dublin-born Jeanette Lowe’s work in the exhibition looks at social housing flats in Dublin and inner-city street scenes. The latter work merges the realism of photography with the visual selection open to a painter. With Edward Hopper in mind, Lowe took pictures of familiar scenes and – with filters and software – eliminated advertising, signs, footpath cracks and other visual distractions.

“I found the more noise I took out of the photographs, the calmer they became,” she said.

Eamonn Doyle’s work offers viewers another transfixing take on Dublin, with gleaming black-and-white images that emphasise soot, skin and idle moments of reflection. Cologne-based photographer Birte Kaufmann moved in with Irish Traveller families and, after gaining their trust, used her camera to explore themes of freedom, isolation and the roles within their community – without romanticising their everyday life.

“[This is] a life where people still hunt rabbits and where horses play a vital role,” she said. “But it is also a life that contains hardship and boredom from an early age. I have been in touch with one large family.”

The Dublin photographer and film-maker Lorcan Finnegan is represented with a striking series of street portraits, melding fascinating faces with natural light and colours.

“Street photography offers me a very different artistic expression from film as it is spontaneous and needs no planning,” he said. “These pictures document a Dublin that I know and love, on the brink of change with the old and new colliding.”

Both Finnegan and Lowe said their work was motivated by a documentarist eye: to capture real Dubliners and the authentic stretch of the city from Trinity College to Irishtown, which has changed like few others in the last two decades.

“Old Dublin culture and people who grew up in the city are being pushed out by house prices, this gentrification thing going on,” said Lorcan Finnegan.

For Jeanette Lowe, the pandemic has demonstrated the dangers of such uncontrolled gentrification. As shoppers and office workers stay home in the suburbs, she says it has fallen to inner-city residents, many in social housing, to prevent city centre Dublin from dying entirely.

“The pandemic has shown that Dublin, unlike other European cities, doesn’t have [a] sustainable population in its city centre,” she said. “The residents left are the engine behind the city, they keep the city going, and if we force them out the city will die. We should be nurturing them.”

Ireland in Frame runs in Berlin until October 2nd and online at irelandinframe.com