Capital Ideas: No one should have to go to a charity to have a wash, writes Alice Leahy 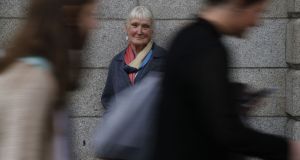 Alice Leahy has written her memoir, with the help of our own Catherine Cleary. Photograph: Nick Bradshaw for The Irish Times

It’s not always easy to see the connection between health and a hot shower. People come down to the Alice Leahy Trust in the basement of the Iveagh Hostel in Dublin city centre to get cleaned up for important events. Sometimes these are forks in the road that might take them one way or another: court dates, an interview with a social worker, a housing officer, a landlord.

We are not a public shower provider. Our washing facilities are part of a holistic health service for people who use the trust. They have been part of what we do for over 40 years since the day we manhandled a huge cast iron bath into our old premises in a health centre on Lord Edward Street.

Last month we provided 276 showers and clean-ups (a wash and shave at a basin). On average, each day in September, 14 people walked back up the steps cleaner, warmer and a little more ready for whatever they were facing.

We often get phonecalls from public health nurses and housing activists wondering if people they work with can come and use our shower. We have to tell them we are not a public shower facility. Every day we see the need for Dublin to provide municipal showers, not just for people living on the streets.

Public showers and toilets allow people to exist on their own terms. Their absence means Dublin treats its citizens as consumers of ever more expensive things. “Yes you can wash your hands or splash cool water on your face,” the city says. “But first there’s that coffee or burger you have to buy, or those many flights of stairs you have to climb under the gaze of security guards or cameras, if you’re lucky enough to be allowed inside in the first place.”

A decade ago we commissioned architect Niall Ó hÉalaithe of Open Office Architects to come up with ideas for public showers. His clever designs put showers into glowing boxes on unused corners, installed one with a grass roof into a spare hollow of ground beside Dr Steevens’s Hospital. He designed another to be slotted into a site on the grounds of Saint Patrick’s Cathedral “in the tradition of Jonathan Swift’s concern for the poor people of Dublin”. The small unit would slot into a recess in the red brick boundary walls, disturbing neither graves nor trees. There were designs for bus shelter showers which could be coin-operated, self-cleaning and fully automated.

Other designs had reception rooms where people could leave their belongings and be checked in. Standalone pre-cast pyramids were fitted with solar panels to help heat the water.

The designs were well-received. The idea went nowhere. We got a barrage of calls, many of them from city councillors, telling us all the reasons showers couldn’t be provided.

Recently a man came down to us after he’d been sleeping in a doorway in Grafton Street. He had had a terribly sad life, and we could see he had been running away from himself. He had a prescription for essential medication and he couldn’t find anyone to fill it. He had a shower, got a change of clothes and a new wheelie bag, and we helped him get his medication through our local pharmacist.

He left looking completely different, almost unrecognisable. We haven’t seen him since.

In a modern capital city no one should have to go to a charity to have a wash. It should be a standard municipal service accessible to all, like buying a bus ticket, paid for by people who can afford it and subsidised for people who can’t.

A one-bedroom apartment on the Rue des Deux-Ponts on L’Île Saint-Louis in the centre of Paris is on the market for more than €600,000. Like most of the city the street feels expensive. But walk through a small entranceway into a courtyard, and there is a handsome bathhouse where you can have a 20-minute shower for free. Just bring your own soap and a towel.

There are 17 Bains-Douches Municipaux all over Paris. They are used by homeless people, families in substandard housing, students, backpackers, people without the resources for gym membership in the fourth arrondissement and other swankier parts of one of the world’s most expensive cities.

They are staffed by friendly municipal workers in blue, white and orange overalls. There is a place to leave your belongings while you take a hot shower, privacy to dress, dry your hair and go back out onto the street anew. They feel like a refuge, safe, clean and kind, a humble but essential part of the infrastructure of a capital city.

In conversation with Catherine Cleary. Alice Leahy’s memoir The Stars are Our Only Warmth is in bookshops now, published by O’Brien Press for €19.99. All royalties go to The Alice Leahy Trust on Dublin’s Bride Road

Of course it would be better to house the homeless, but having decent places for people to wash and take care of themselves is clearly of value. The issue is finding sites, but you would think there is enough State-owned land to make this possible and integrate it with existing homeless services. A simple, low-cost, easily executed proposal, this should be a high priority.

These facilities could be located close to other services for homeless people as part of an integrated strategy on homelessness – the benefits of which would far outweigh costs. These should be placed not just in the city centre, but also in towns and communities throughout the greater Dublin region.

An excellent idea. It should not be just about capital investment but about making sure that there are supporting services alongside it. So in addition to capital projects, there must be service and maintenance budgets provided. The better the design, the lower the overall costs will be.

Lewis Capaldi: ‘I’m not Justin Bieber or Ed Sheeran – I’m not getting chased down the street’
8