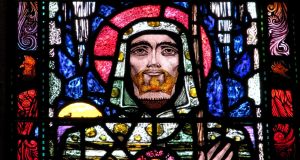 Besides building up the stained-glass business, Clarke looked for work as an illustrator and won several commissions from Harrap

Harry Clarke crammed a staggering amount of work into his tragically short life. His achievement is all the more remarkable given that he struggled with ill health throughout, and was eventually diagnosed as suffering from tuberculosis. He had been seriously unwell for some time when he died in his sleep on January 6th, 1931.

He had stopped overnight in Coire, a small Swiss village, on his way back to Dublin having spent several months at Davos in a vain attempt to rescue his rapidly failing health. In all likelihood he knew he was dying and, travelling in winter, took a desperate gamble on getting home.

His time at Davos was further troubled by the uncertainty surrounding the fate of one of his masterpieces, The Geneva Window, still technically a work in progress. The window, a major undertaking, had become mired in political and diplomatic complications.

Originally commissioned by the state for the International Labour Court in Geneva, its eight stained-glass panels make up a concentrated visual compendium of 20th-century Irish literary imagery, but a morally conservative political establishment was appalled by what it viewed as negative, licentious representations of Irish culture – one panel has a drunken Gilhooley leering at the dancing, semi-nude Nelly, from Liam O’Flaherty’s Mr Gilhooley, for example. That it never made it to Geneva and now resides in Florida is a telling indictment of the cultural arbiters of the time.

When he was born in 1889, his parents had moved to a spacious Georgian house on North Frederick Street in Dublin. To the rear was his father’s workshop, where he ran a growing business as a church decorator. He added a stained-glass studio.

Following his mother’s death, from tuberculosis, when Harry was just 14, be worked as an apprentice with his father. His exceptional abilities were quickly evident and he went on to study at the Dublin Metropolitan School of Art, picking up prizes along the way. He met and married a fellow student, Margaret Crilly, herself a fine artist.

Besides building up the stained-glass business, Clarke looked for work as an illustrator and won several commissions from Harrap. These tree major strands of activity – running the business; being intricately involved in the design and production of stained-glass projects for Ireland, the UK and as far away as Australia; and illustration – amounted to an unsustainable workload. As his health deteriorated in the 1920s, Margaret became increasingly involved in the business with her brother-in-law Walter.

Following Clarke’s death, his good friend Lennox Robinson wrote that “Ireland has lost her greatest designer in stained-glass, and her greatest black-and-white artist”, and he remarked on the intensity with which Clarke had thrown himself into his work. Clarke’s exceptional talent was never questioned, and the outstanding quality of his work, in both stained-glass and illustration, has always been recognised – the brilliance of his work was in full view in churches throughout the country – but he was for a long time underestimated nonetheless.

He lived through an extraordinary period in Irish history, from the Celtic Revival, through 1916, the War of Independence, the establishment of the Free State and the Civil War and the beginning of the nation-building project in the latter half of the 1920s. Harry Clarke and Artistic Visions of the New Irish State is an anthology of essays that set out to locate the artist in his time, and in relation to the political and cultural currents of his time.

It’s fair to say he did not fit neatly into any cultural historical narrative that emerged from his era. Commentators inclined to see the rise of modernism as progressive found him too conservative, a bit of an oddity. At its simplest this view cast him as not much more than a disciple of Aubrey Beardsley, an artist who was, to be fair, clearly a significant figure for Clarke.

The late, lamented Nicola Gordon Bowe, whose extensive research and writings on Clarke, starting with his graphic work and culminating in a benchmark biography, The Life and Work of Harry Clarke, in 1989, the centenary of his birth, is the figure most responsible for a comprehensive overhaul of his achievement and reputation, and the renewal of academic interest in him.

In her biography Gordon Bowe places him squarely as an Irish symbolist, like his friends WB Yeats and George Russell. If he could not be co-opted into a modernist narrative of Irish art history, neither could he be accommodated in the nationalist camp.

As the new collection of essays make clear, he was deeply interested in and informed about Irish cultural history and, for example, friendly with Seán Keating, but, as Éimear O’Connor writes, steeped as his work was “in Irish literature and tradition … it was creatively conjoined with” myriad European and eastern influences. The nature of his work, in illustration and stained glass, put him firmly in the midst of an emerging phase of Irish cultural life, but he was not engaged in consciously shaping or defining Irish identity in the way that Keating was.

Despite the volume’s title, the purpose of these essays is not to slot Clarke’s work into any particular box representing a vision of Ireland, but to contextualise him in a more open way.

In that sense it builds on Gordon Bowe’s biography. What emerges enriches our view of Clarke as an artist. Not least in illuminating the density of thought and observation that he put into everything he did. Kelly Sullivan’s essay, Harry Clarke’s Natural World, is especially informative in this regard. She begins with a quote from a book reviewer in 1920, noting of one illustration: “Mr Clarke can make a daisy look corrupt,” and goes on to elaborate, speculatively but compellingly, on the extent of the artist’s sources and references, from works on botany and natural history to the Blaschka glass models in the Museum of Natural History. She meticulously sifts through stained-glass panels and illustrations to build her case, and her close reading is fascinating and revealing.

Don McLean: ‘My ex-wife is the worst person I ever knew’’
3

Matthew McConaughey: ‘Everyone’s in a bit of a pickle, and it’s not a little gherkin’
4