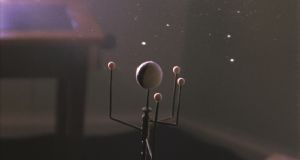 Dust Defying Gravity (2004) from the exhibition 3 Different Nights Recurring by Grace Weir. Courtesy of the artist 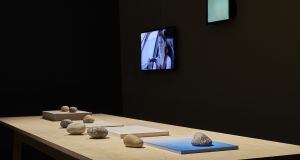 If Only Something Else Had Happened (2011) from the exhibition 3 Different Nights Recurring by Grace Weir. Courtesy of the artist 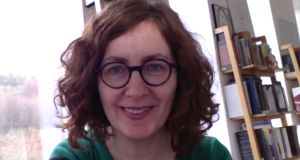 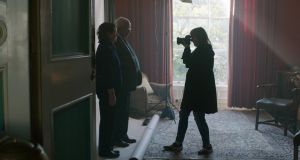 A Reflection on Light from the exhibition 3 Different Nights Recurring by Grace Weir. Courtesy of the artist

‘When I hear the word ‘science’,” says Grace Weir, “it’s like hearing the word ‘art’. Are you thinking of opera, contemporary, abstract, theatre?” It’s the same with science, she says, describing how, even within one scientific discipline, such as physics, there are schools and schools of thought: applied, experimental, theoretical . . . And even within them, they don’t always agree.

As she warms to her theme, she comes across as a restless, excitable energy. There is a constant quest for connections at odds with the calm clarity she brings to her art. At the exhibition 3 Different Nights Recurring, which takes in more than 20 years of Weir’s work, these range from If Only Something Else Had Happened (2011), a series of stones demonstrating the simple yes/no logic of Boolean algebra (the underpinning of all computer code); to Forgetting (The Vanishing Point) from 2001, a video of a slowly dispersing cloud, projected on to the open pages of a book: a study of evidence dissolving or reason diffusing, perhaps.

Weir’s work is brilliant and persuasive. She uses beauty to get under the skin of some of science and art’s most complex questions, such as the movement of light and energy, and the essence of time. Just see Dust Defying Gravity (2003), filmed at Dunsink Observatory, to feel the marvel and wonder art and science can induce when focusing on the mysteries of the universe. “Science is as complex and contentious as art,” she says. “People think of it as solid and factual, but I’m trying to show that those ‘facts’ are actually processes.”

The title of the exhibition comes from a note made by Irish astronomer William Parsons, the third earl of Rosse, who in the 1840s built the world’s largest telescope.

“He went out and drew the galaxy over three nights,” says Weir. “And from that he discovered that galaxies are spiral-shaped, and that’s his scientific proof. But I’m thinking, What else happened on those nights? What was the weather like? How was he feeling? Drawing is very subjective.”

Art was always in Weir’s future. She was born in Dublin, the daughter of painter Liam Weir. “But in school I had always been a science and maths head. I was accepted into natural sciences at Trinity.”

Instead she went to NCAD, and then later to do a master’s degree in multimedia at Trinity College Dublin. Her films and installations were shown around the world, including representing Ireland at the Venice Biennale in 2001.

She was one of the original artists in Temple Bar, before officialdom took over that area, where she shared a studio with painter Nick Miller. Now, with her husband, the artist Joe Walker, she lives in Leitrim in a mirrored house set into the landscape, designed for the couple by Dominic Stevens. It must be a good place for creativity, away from the cities and the international art world, but what is most interesting for Weir is the engagement, the discussions with scientists and other thinkers and the process of bringing those ideas and conversations into the world.

“A lot of science is theoretical now: it exists in papers. Science has become more removed. A lot [of scientists] envy art; they like that my work is in the public realm.”

Many of those scientists might be disappointed to discover how esoteric people consider contemporary art to be. But Weir adds that “it was an inquiry into time that led me back to science. And that brought me back to my interest in physics.”

She describes “a sublime moment” when she suddenly understood Einstein’s theory of relativity. “It’s counterintuitive. It’s like we used to think the sun went around the Earth, because it looks that way. Time appears to flow, but it may not. Relativity says that time and space are dynamic, and it’s the speed of light that’s constant.” I’m lost, but that’s part of the point of these artistic inquiries into the nature of science. They can open up a space for those leaps of counterintuition, those times when we realise thinking along existing lines can only reproduce interpretations of what we already think.

“In constructing our alternatives to reality, we are constrained by our understanding of reality,” says Ruth Byrne, a psychologist and professor of cognitive science at Trinity College Dublin, in an interview that forms part of If Only Something Else Had Happened.

The exhibition culminates in the film A Reflection on Light (2015), shown alongside Mainie Jellett’s 1942 study for her painting Let There Be Light, which is now on permanent display in Trinity’s school of physics. “That painting is a complete crossover between art and science,” says Weir. I found that there’s a copper instrument in the physics department that had been invented by Jellett’s uncle, George Fitzgerald, whose work led Einstein to relativity.”

The connections continue, and a sense of Ireland’s extraordinary legacy in the development of scientific thought grows. Fitzgerald’s instrument was for looking at prisms, whereas Jellett’s painting is an explosion of light, fractured through cubism into shapes that hint at recognisable forms, but only just.

“We talk about art like a series of movements, about history in a separated way, and it doesn’t evolve like that. That painting is a constant in time and space. It doesn’t exist in the history of art, it exists in the history of the world. There has to be structures,” she says, pondering how specialisation leads to greater expertise but also generates exclusion. “But I don’t understand why there’s not more dialogue.”

Dublin’s Science Gallery regularly blurs the boundaries, showing science projects and art side by side, demonstrating how goals are shared and ideas transmitted. dublin.sciencegallery.com

The UCD Parity Studios, which began as UCD Art in Science, is an artist-led programme in partnership with a range of UCD faculties. It was set up in 2011, arising from a collaboration between artist Emer O’Boyle and professor of astronomy Lorraine Hanlon. The 2016 artists in science residencies have just been announced as Fiona McDonald, Brian Duggan and Jennifer Redmond. Maria McKinney continues her residency for another year. ucdartinscience.com

Trinity College also hosts artistic residencies within its science departments. Grace Weir is currently artist-in-residence at the school of physics, and in 2011, to celebrate the 300th anniversary of the school of medicine, a series of 11 residencies culminated in a major exhibition, Apertures and Anxieties, at the RHA.

Leonardo takes its name from that towering figure in art and science Leonardo da Vinci. The international society for arts, science and technology is a global network for research, data-sharing and arts awards, including in 2014 to Irish artist Conor McGarrigle looking at “big data” and augmented reality.