Pioneers of agitprop, from Russia to Tyrone | Visual art round-up 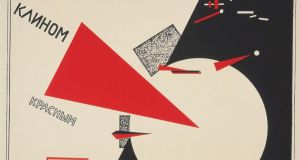 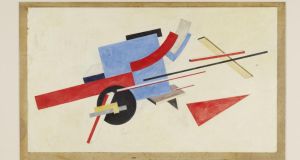 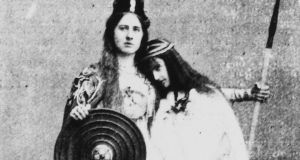 El Lissitzky: The Artist and the State

This exhibition centres on the unlikely pairing of one of the leading figures of the Russian avant-garde and Alice Milligan, the Irish writer, poet and political activist. But it’s not that unlikely, as it happens. Both were deeply involved in using art as a means of effecting change in their prevailing social and political circumstances. And each was devoted to the cause of a radical new state that ultimately failed to live up to their hopes and ambitions.

Lazar Markovich Lissitzky, born in a small town near Smolensk, was Jewish, and his political sympathies were presumably swayed by the fact that he became an adult when tsarist anti-Semitic laws were thrown out in the brave new world inaugurated by the Russian revolution. He trained as an architectural engineer, but he created his own role. The word “artist” doesn’t seem quite adequate. Artist, teacher, designer and theorist, perhaps, with a dash of advertising executive thrown in. The superlative selection of his works on view comes from the Van Abbemuseum, Eindhoven, where the Lissitzky Foundation was established in April.

Gonne but not forgotten

Milligan is represented by a wealth of archival documentary material, including fascinating photographs relating to her theatrical work with Maud Gonne. She was born in Gortmore, Co Tyrone. Her background was unionist and Methodist, but while studying in Dublin she was politically influenced by Parnellism, and her studies of Irish history and culture won her over to the nationalist cause.

Back in Belfast she became an energetic activist, writing, editing and teaching and eventually working full time for the Gaelic League. A pioneer of agitprop, she devised elaborate tableaux vivants, enlisting local people in consciousness-raising theatrical spectacles.

Despite the quality of her work and the significance of her political contribution, Milligan was effectively sidelined following partition. An Irish nationalist from an Ulster unionist tradition, she found herself in an odd position, and retreated to Tyrone when her brother’s British army connections made her vulnerable in Dublin. Catherine Morris, who documented and explores Milligan’s life and work in her book Alice Milligan and the Irish Cultural Revival, rediscovered her story.

Lissitzky was closely associated with and influenced by Kazimir Malevich, from whom his angular, geometric visual language and much else derives. Like Malevich he is often labelled a suprematist, pure and simple. He was, loosely speaking, a suprematist, but the art historian Aaron Scharf makes an important distinction between the two, identifying Lissitzky as a constructivist. It’s not a question of style. Malevich’s radically abstract art was specifically non-utilitarian. He resisted the convergence between art and technology that delighted so many of his contemporaries, and rather than addressing practical issues in a material world, he claimed that his work reached into the unseen, the unconscious.

That was anathema to the constructivists in post-revolution Russia, who were all about utility: art applied to and for society, shaping and serving an emergent social reality. They embraced the terms “tectonic” and “factura”, the former being the overall, socially focused concept, the latter its material production. Production depended on rigorous design principles, including attention to appropriate properties and techniques. Lissitzky, abundantly creative across a variety of disciplines, rated exhibition design as among the most significant of his activities.

In fact, he was also influentially innovative in architecture, interior design, graphic art, typography and book design, and he was particularly adept at photomontage. There was a fundamental mismatch between the speculative projects dreamed up by the Russian avant-garde, including Lissitzky, and the pre-industrial infrastructure and capabilities around them, which dated back to tsarist Russia. Mulling over the problem with libraries, for example – too many books and documents – he came up with a radical solution, an electronic library, some time in advance of the worldwide web, Google and the ereader.

He, like many of his contemporaries, mixed with his European counterparts (he was cultural ambassador in Berlin for a time), and he readily acknowledged that the technological revolution had happened in the US and western Europe and was shaping the architectural future. Only one of his numerous proposed buildings, and a modest one at that, was realised in Moscow, and it was reportedly destroyed by fire in the recent past.

His desire to move towards the concrete is encapsulated by his term “Proun”, a word of uncertain derivation but approximating to a new art object. His idea was that a Proun progresses from a flat, graphic design to a three-dimensional model and finally to a full-size, working object. In the event, Lissitzky’s Prouns as they exist, in two and three dimensions, are beautiful, precisely articulated art objects, but their utilitarian destiny remains elusive. In fact, it is their non-utilitarian elegance that accounts for their aesthetic appeal, so Malevich may have won that argument.

The Russian avant-garde had no interest in easel painting and most aspects of the traditional representational arts, and could be downright antagonistic towards them. Rather than transforming the aesthetic taste of the public, however, this merely left the way open for the increasing dominance of crudely propagandist socialist realism. One of Lissitzky’s last projects before he died in the winter of 1941 was a motivational poster for the war effort.

Appropriately, Lissitzky and Milligan are the stars of the show, though all four contemporary contributions, by Rossella Biscotti, Núria Güell, Sarah Pierce and Hito Steyerl, are thoughtful and quietly provocative.