Librettos on the beach: Standouts at this year’s Venice Biennale

Also known as the Art Olympics, this vast exhibition features works from 89 countries 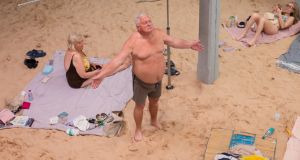 Sun & Sea (Marina), an installation in which opera singers spring to vocal life on an artificial beach, by Andrej Vasilenko

With 89 countries sending their brightest and best, the Venice Biennale can seem like an overwhelming mash up of the Eurovision and the Olympics. The exhibition spreads throughout the Arsenale, the vast buildings where Venice’s pre-industrial shipping fleets were built; the Giardini, in which 29 countries also reveal their various nationalisms via the architecture of their permanent pavilions; and in churches, palazzos and other buildings across Venice.

Add to that a whole range of additional exhibitions and events and, to put it another way: even if you spent a whole week there, it’s unlikely you’d get to see everything. So what makes a good Venice Biennale exhibition, and if it truly is the Art Olympics, how can you win?

This year, the Leone d’Oro / Golden Lion for Best Pavilion went to Lithuania, for Sun & Sea (Marina), an installation in which opera singers spring to vocal life on an artificial beach, performing a libretto about boredom, anxiety and climate change. Two years ago, Germany won when Anne Imhof fenced in the pavilion and added guard dogs. Those who braved the queues were treated to performers imprisoned under glass floors. Before that, it was Armenia, with a large group show on the somewhat distant island of San Lazzaro.

From this, we can extrapolate that the Venice judges like the off-beat and non-obvious. They like the hard to find (the location of the Lithuanian pavilion, in the Marina Militare, was, even for Venice, a puzzle to discover), and they like pavilions that necessitate a queue. Perhaps this is because people love to feel they have discovered something. They also like to feel they have experienced something that other people haven’t or can’t. The Lithuanian singers only perform on a Saturday. Go any other day, and there isn’t even a video of what you have missed. Instead, you get to read the libretto on pages attached to the balcony overlooking the “beach”.

Thinking in this way, perhaps the perfect Venice show would be something that only let one person in at a time, but which didn’t exist at all, notionally staged on an impossible to visit island. But Venice isn’t all about winning. For the commissioners of the Irish pavilion, currently in one of the final spaces in the enormous Arsenale, it’s also about selecting the artist who would most benefit from the extraordinary exposure a Biennale exhibition brings.

In the past, mistakes have been made by ignoring major Irish artists with established international reputations, the judgement being that they don’t need it like other artists do. But at Venice, if you don’t swim like a pro, you sink. This year, Eva Rothschild has plenty of experience. She previously held her own with an installation in Tate’s famous Duveen Galleries (2009), and her 2014 exhibition at the Hugh Lane was quite brilliant.

At Venice, however, her vibrant and affecting work is cramped by the relatively small space. Having already come through one part of curator Ralph Rugoff’s huge main exhibition, entitled May You Live in Interesting Times, you’re experiencing what Amy Whitaker describes in her book of the same name, as “museum legs”. You’re tired and your mind is full. So pacing is important. Prior to 2015, the Irish pavilion was sited at various venues around Venice, before moving to the Arsenale: where you get more visitors but less of their attention.

The Philippines Pavilion, in the same series of spaces as Ireland, grabs you with spectacle, while the Ghanaian routes you through with careful lighting and a fully rebuilt interior. But in Ireland, there’s a sense of clutter, despite the strength of the individual works. You don’t get to feel what Rothschild is trying to do, only to see the results of her various labours. It is not helped by the exhibition text, in which we are told we’re getting “a specific sense of materiality […] reflecting a refined spatial knowledge and a sensibility that builds on and subverts familiar modernist modes”.

This isn’t as bad as the text by Cathy Wilkes, representing the UK with a barely-there installation that is the opposite of Rothschild’s in terms of the space/content equation. “On both the left and on the right there is nothing worth seeing and nothing worth hearing,” writes Wilkes. “I return home to wait in place and draw forth what is yet to come.” Indeed. Dreadful exhibition texts are a feature of Venice, in some instances because they have clearly been poorly translated. Mostly it’s due to that insecurity that afflicts some people in the art world, causing them to adopt a jargon, signifying membership of the club.

The Venice Biennale is unique in that it prioritises nationality in the form of the pavilions, and the trick to a successful presence is to connect to what distinguishes us, as we also strive for a truly international voice. Assuming a level of artistic excellence, the national pavilions that work best are those with some sense of the culture of, or a link to, their country of origin.

As globalisation creates a tendency to homogenisation, and a blurring of individual characteristics, new nationalisms spring forth. We may be on the way to a true multiculturalism, or not, but we can’t deny a sense of where we have come from. This isn’t to argue for an Irish pavilion festooned with shamrocks, indeed the French pavilion, by Laure Prouvost is exemplary in how to achieve it. It’s trick,y but in the clamour of voices that make up this extraordinary event, it’s a feat well worth reaching for.

If you happen to be in Venice on a Saturday, it’s worth seeking out the prize-winning Lithuanian pavilion, but on weekdays you’re just looking at an empty beach. Check these out instead.

What: Deep see blue surrounding you, by Laure Prouvost

Former Turner Prize winner, Prouvost sends you into the French pavilion by the back door, as a French guide charmingly explains, there’s a tunnel to the neighbouring British one “because of Brexit, you see”. Inside, there’s an aqua floor cast in Murano glass with plastic detritus and cigarette butts. Go further in to watch a rambling yet fascinating video that ranges through experiences of contemporary France’s diverse cultures and communities, all dissolving generously into a common humanity.

After the exhausting clamour of all the installations, brilliant painting is potently welcoming, and that’s what you get with Yiadom-Boakye’s small gallery of works within a space designed by David Adjaye. Add film and installation, and this pavilion gives you a true sense of connection with a distinct and vital cultural voice.

Inspired by the 150th anniversary of Mahatma Gandhi’s birth, this is a moving meditation of a pavilion with some art surprises thrown in to make you wonder about a different way of ordering the world. Kallat’s video installation based on Gandhi’s 1939 letter to Adolf Hitler on the eve of war is mesmerising, while Kulkarni’s cane body armour works on many levels to leave you thinking.

Perhaps more spectacle than artistic excellence, this pavilion is pure delight. Take your shoes off (very welcome at this stage) and climb on to platforms, where you stare down into what appears to be the infinite depths of eclectic shelves, desks, workshops. It’s all done with mirrors, but you’re still jolted off balance. A representation of the Philippine archipelago? I don’t know, but I didn’t want to come down.

What: Lc 15:11-32, by Alexander Sokurov and Alexander Shishkin-Hokusai

This film director and artist collaboration sees the Russian pavilion transformed into an immersive homage to Rembrandt’s Return of the Prodigal Son, one of the masterpieces of the Hermitage Museum’s collection, and to the museum itself. Upstairs is dramatic yet quiet contemplation, while downstairs discover images of war and mayhem complete with dancing (or dying) automata.

And the main event:

Ralph Rugoff’s sprawling show, May You Live in Interesting Times (someone putting “Theresa” stickers in front of the “May” on exhibition posters around the city provoked great hilarity), is in two parts, with the same artists exhibiting in each. The Arsenale is the better show, not least because the curator can create a clear narrative through: the International Pavilion in the Giardini is, architecturally speaking, a rather rambling mess.

In the exhibition, which shifts the narrative away from those of the formerly dominant “master cultures” of Europe and, later, the US, standouts include Shilpa Gupta’s installation bearing witness to prisoners of conscience, For, in your tongue, I cannot fit; Carole Bove’s cleanly uncanny sculptures; Kahlil Joseph’s video BLKNWS; and Arthur Jaffa’s installation – all in the Arsenale; Michael Armitage’s quietly powerful ink drawings in the Giardini; Halil Altindere’s Space Refugee installation, also in the Giardini; and Hito Steyerl’s video installations in both venues.

And a lowlight: Christoph Büchel’s Barca Nostra sees the artist siting the wreck of a ship that sank off the Libyan coast in 2015, an event in which between 700 and 1,100 drowned, opposite the outdoor café at the end of the Arsenale. Possibly meant to be a profound artistic comment, it smacked of opportunistic and voyeuristic cultural exoticism.