Art in focus: The Augurs I, II and III by Martin Healy 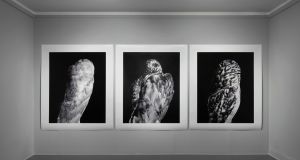 The Augurs I, II IIIThe Augury

Is it a typical work by the artist? In a way it is. Healy’s work ranges far and wide, but underlying patterns and obsessions come through. Baker’s book stands apart from volumes that might seem like close relations, notably TH White’s The Goshawk and Helen MacDonald’s H Is for Hawk. The difference is that Baker had no interest in falconry, no wish to possess and train a bird of prey. In his obsessive tracking of the bird, he wants to apprehend its consciousness in all its non-human strangeness. He spends many cold, uncomfortable hours waiting in vain for a glimpse of the bird, which is elsewhere, unknowable. His book records

winter 1962-1963, when peregrines, poisoned by DDT and perhaps other chemicals, were rapidly disappearing. Peregrine populations have since recovered, but their precarious situation at the time certainly coloured Baker’s mindset.

As with Baker, in his work Healy recoils from the conventional pattern whereby the role of the raptor, or some other natural agent, lies in comforting or healing the human protagonist, or in being co-opted as symbolic in some way of human power or strength. The root of the problem as they see it is the morally convenient formulation that humans were created in God’s image and granted dominion over nature.

In retrospect Healy’s unease with this unsatisfactory idea surfaces in some way in almost everything he has done. A gulf of incomprehension, an inability to grasp what is going on in nature and recognise our position as part of nature, general hubris and self-sabotage, all recur. But Healy does not begin with, say, a conservationist message and figure out a means of conveying it. He is drawn to stories – to urban myths way back in Looking for Jodie and Here Be Monsters – and motifs that work as metaphors for basic human misunderstanding or failure. In terms of motifs, he first used raptors in The Sleep of Reason in 2006, drawing on Goya’s celebrated etching. The sleep of reason, to complete Goya’s title, produces monsters.