Punk goes down the pan at the Met 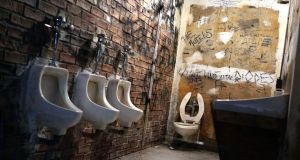 Commodified: the Metropolitan Museum of Art’s re-creation of the CBGB toilets for its show Punk: Chaos to Couture. Photograph: Spencer Platt/Getty

Exhibitions are seldom funny, but Punk: Chaos to Couture , the Metropolitan Museum of Art extravaganza in New York, is hilarious.

Two exhibits in particular had me wiping away tears of mirth. The first is a reverential re-creation of the men’s toilets of the CBGB club in the East Village, circa 1978. It’s all there: the dirty brown walls, the scrawled graffiti, the single roll of damp toilet paper tossed casually between the two sinks, the cigarette butts. And what’s most impressive is that someone’s gone to the trouble of staining the toilet bowls a delightful shade of, shall we say, ochre. Yes, spattery, incontinent ochre. It might even have been applied, we are to imagine, by a genuine god of punk, such as Richard Hell or Tom Verlaine.

The full comic potential of this shrine is realised only in conjunction with the second great slab of absurdity. This is in the gift shop. (There is no longer a workable distinction between the show and the shop in exhibitions like this: they form a perfect continuum.) There you can buy an exclusive Moschino T-shirt to celebrate what one caption in the show calls the “meta-trash aesthetic” of punk. It’s a white T-shirt with cut-out letters and safety pins on the front, forming the supremely bland slogan “In Love We Trust”. The cost? $25. Only kidding – it’s $350. Put together these two things – a literally po-faced reverence for what was, after all, just a style of popular music and fashion and the relentless, shameless gouging of capitalism’s carnival barkers – and you get a good sense of what Punk: Chaos to Couture is like.

In retrospect, what stands out about punk is not its self-conscious aggression or its determined ugliness but its hopeless, swooning innocence. Punk was the last flowering of romanticism, the final fling of an impossible idea. That idea has two parts. One is that there is such a thing as pure, free expression. And the other is that this outpouring of true feeling is a threat to power, that it constitutes a profound challenge to the established order.

Or, as Vivienne Westwood puts it in the catalogue for Punk: Chaos to Couture , “I did not see myself as a fashion designer but as someone who wished to confront the rotten status quo through the way I dressed.”

Punk wasn’t entirely naive. Those who started it in New York and London knew very well that capitalism had become very good at absorbing, commodifying and monetising the romantic revolt. They’d seen that happen to rock’n’roll and to hippie styles (once, in their way, no less disturbing to the mainstream than punk would be in its brief moment of innocence).

But they thought there were more cards to play: ugliness, ineptitude and disposability. Let the feelings expressed be raw, spittle-flecked anger; let the style be rough and jarring, saved from any danger of beauty by the incompetence of the musicians; let the materials be literally what was thrown away by consumer capitalism. How could the system deal with a romantic revolt that rejected all of its moral, aesthetic and material values?

The defensive force-field seemed impassable. Rational, political slogans – “Give Peace A Chance” – had been easily marketised. Posters of Che Guevara hung on millions of bedroom walls. So punk went not for politics but for nihilism and repulsiveness. Richard Hell made Television’s guitarist Richard Lloyd wear a ripped black T-shirt with “Please Kill Me” stencilled on the front. The New York Dolls wore swastikas. Westwood and her partner, Malcolm McLaren, wore T-shirts that she designed and sold; his bears the image of a man in a leather mask and the legend “Cambridge Rapist” (a real and vicious sex attacker who wore such a mask when he terrorised Cambridge in England in the early 1970s); hers has the frontal image of a naked prepubescent boy, evoking paedophilia. The complete lack of taste or tact or decency would surely mean that this revolt could not be co-opted.

The physical materials of punk fashion, moreover, were defiant celebrations of poverty. The ripped clothes and safety pins spoke, initially, of an inability to buy new stuff. The paint-spattered shirts worn by The Clash suggested working clothes. Black plastic rubbish bags, transparent sheets, even Tesco shopping bags: all of these were recycled into punk clothing. How could this ultimate anti-consumer style be turned into consumer product?

As it happens, surprisingly easily. The lesson of Punk: Chaos to Couture is never to underestimate capitalism. Punk was a genuine challenge. Absorbing all of this dirt and ugliness and offensiveness into high consumerism was tougher than converting Blowin’ in the Wind into I’d Like to Teach the World the Sing . It took a little while, and punk had its moment of raw power. But it was done, nonetheless. The fashion industry sucked everything out of punk – even the plastic bags, even the inane printed slogans, even the safety pins and rips, even Johnny Rotten’s straitjacket T-shirt – and repackaged it as desirable (and expensive) commodities. It took the punk aesthetic of recycling and recycled rage into money.

The Met show might have been a fascinating case study of late capitalism in showing how this final challenge was triumphantly met by capitalism. Instead, with its repacking of a filthy toilet as a shrine and of a do-it-yourself punk T-shirt as a $350 dollar fashion item, it completes and sanctifies
that very process.