Comment: Plans for the former DIT site are a commodified vision of the ‘New Dublin’ 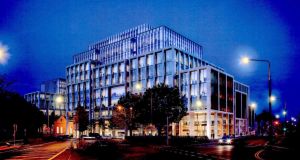 The former College of Technology on Dublin’s Kevin Street may not be among the most distinguished modernist buildings from the mid-20th century, certainly not in the same class as Michael Scott’s Busáras, Desmond Rea O’Kelly’s Liberty Hall or Ronnie Tallon’s Television Centre on the RTÉ campus in Donnybrook. But it served generations of students before the 3.5-acre site was sold in April 2019 for a staggering €140 million.

The comprehensive redevelopment plan now being proposed for Kevin Street represents a composite vision of the “New Dublin”, commodified for international capital investment and facilitated by high-handed changes in apartment design standards and building heights mandated by planning “guidance” issued over the past three years by former minister for housing, planning and local government Eoghan Murphy, the local Fine Gael TD.

This is amply evident in the documents submitted by the applicant, “GA Development Dublin ICAV acting for and on behalf of its sub-fund GA Development Fund”, particularly in a report prepared for Westridge Real Estate by property consultant Mark Dunleavy; it describes “The Asset” to be created at Kevin Street as “an exciting, state-of-the-art, mixed use development comprising of 299 five-star Build-to-Rent apartments along with Grade A office space”.

With its “amazing location” close to bars, restaurants, music venues and St Stephen’s Green, he says it “will be more than a place to live, it will be a community”, with a residents’ lounge, fully-equipped gym, billiards room and 24/7 concierge service as well as weekend jogging, yoga, wine & cheese evenings, summer BBQs, movie nights, fashion events, art exhibitions, theme days and food festivals, making it “the market leader [for] build-to-rent assets in Dublin city”.

This is echoed by HJL Architects, who describe the proposed three office blocks ranging from five to 11 storeys and two residential towers, one up to 10 storeys and the other up to 14 storeys, as an “offering to the public of new civic spaces, connections and an exemplar mixed-use development” that would become “a landmark destination for the community to enjoy” as well as “a new vibrant hub which will be family-friendly” and “a benchmark for inner-city living”.

So what’s not to like? Quite a lot, according to a very large number of objectors – more than 60, including myself.

Apart from concerns about excessive building heights, there’s also serious misgivings about the residential mix. Of the 299 apartments planned, 130 would be studios, with a further 130 one-bedroom units and only 39 two-bedroom flats. The scheme hasn’t got even one three-bedroom apartment, so there’s nothing very “family-friendly” about it.

Apartment design standards for Build-to-Rent (BTR) schemes are lower than for more traditional housing. Thus, in the Kevin Street case, two-thirds of all the apartments are single-aspect, generally facing east or west, while many of those described as “dual-aspect” units only have a sidelight beside their main window. Floor plans show that up to 19 apartments would open onto long corridors at each level while just over one quarter would have their own balconies.

Both of the residential blocks would have communal roof terraces looking south over St Kevin’s Park and there would also be a landscaped courtyard between them as well as a dog-legged pedestrian route from Kevin Street to Camden Row, which the applicants say would be open 24 hours per day.

A café is proposed for the middle of the scheme, facing an exhibition hall extension to Dublin City Council’s public library on Kevin Street, dating from 1904.

But the single-storey library, with its high-pitched roof topped by a copper cupola, would be dwarfed by the three office blocks planned for the frontage of the site. Their design has evolved over the past year, with HJL Architects looking at all sorts of options, drawing heavily on examples of similar schemes in London, before coming down in favour of dividing the blocks into five elements and selecting travertine vein-cut limestone for their façades.

Apart from the library, which is being retained as a sole remnant of the past, there would be no active uses at street level other than revolving-door entrances to the office blocks; no provision has been made for a convenience store, not even on New Bride Street, where six houses and a former shop are to go.

But then, the new Garda Station, diagonally across a very expansive traffic junction, also has no active frontage – unless you count its “rhyming wall”.

Meanwhile, we can anticipate that the DIT college on Bishop Street/Aungier Street – now part of the Technological University of Dublin (TUD) – will attract similar interest from developers and international investment funds when it is vacated as part of the university’s plan to centralise its campus at Grangegorman. Built on the site of Jacob’s biscuit factory, it stands just five storeys in height. In all probability, it could face redevelopment at a larger scale.

The residential towers proposed for Kevin Street meet the minimum requirements for BTR schemes, but it is surely substandard – especially in the context of Covid-19.

As a result of the pandemic, we need to look at domestic space in a different way and imagine what it would be like to be cooped up in a small apartment with no private open space. Indeed, that’s one of the main drivers (along with remote working) of a surge of interest in country properties.

If we are to make city living more attractive, the planners need to revert to the higher standards laid down in the current Dublin City Development Plan to promote “sustainable urban densities through the creation of attractive mixed-use sustainable neighbourhoods”, where apartments would be “sufficiently spacious with all the necessary facilities to provide a level of residential amenity attractive to families with children” as well as singles and couples.

These idealistic objectives were set aside by the 2018 Sustainable Urban Housing: Design Standards for New Apartments Guidelines, introduced to cater for a “market demand” for BTR schemes in response to pressure from the development sector.

Unfortunately, Dublin City Council planners have not challenged the BTR element of the scheme for Kevin Street, apart from requesting further information to show that the two towers would not have a detrimental impact on the residential amenities of nearby properties.

They also want to see changes in the scale, massing and architectural treatment of the three office blocks to “create something of exceptional design quality in response to the site’s highly visible setting”.

With so many objections made against the current proposals, it is inevitable that the final decision will be made by An Bord Pleanála, which has been adopting a liberal approach to high-rise schemes in line with the largely indiscriminate ministerial guidelines on building heights. All that’s left for us to do as citizens of Dublin is to register our disapproval and plead the case for protecting the city’s architectural heritage and its human scale.