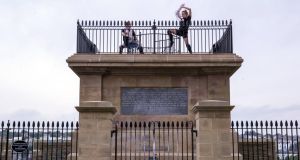 It must be uncomfortably precarious being up on a pedestal these days. As tensions spill over into action and whitewashed views of history are finally revised, the wonder is that it hasn’t happened more thoroughly sooner.

For example, students at Oriel College Oxford have been trying to have the statue of Cecil Rhodes removed for years. Rhodes had founded Rhodesia, now Zimbabwe, in the days when it seemed (to some) reasonable to annexe a territory, erase its history and have it named it after yourself.

To all those alarmed by the current wave of statue-toppling, it’s actually naive to think that a focus for reverence as well as propaganda won’t also have the propensity to become a focus for rage – and stone isn’t as eternal as the sculptors might have thought. Shelley spotted that back in the 1800s in his poem Ozymandias. Yes, they may come to provide hideous warnings, rather than triumphalist reminders, but anything set on high is always going to be looking down on someone.

In many former communist countries, you can take a trip to sculpture parks and see the now de-plinthed Marxes, Lenins, Stalins and their cronies, now at eye level, and often looking rather ridiculous.

It is a salutary message, as free thinking is often in short supply, not only in dictatorships but, in highly polarised times, in democracies too.

In Ireland, the IRA and others managed the question of the transition of public sculptures from colonial times to the self-rule era by blowing them up, which is a definitive, if not democratic gesture. William of Orange (College Green), George II (St Stephen’s Green) and Nelson’s Pillar (O’Connell Street) were all destroyed, as was the statue of the Rev George Walker in Derry.

Now, a joint commission by Derry’s Void Gallery, the Siege Museum and Friends of the Derry Walls, supported by Ireland’s Department of Foreign Affairs, will see temporary pieces of public sculpture on the empty Walker Memorial Plinth.

The plinth itself was built in 1826. It held a 25m-high column topped by a 5m-high statue of Walker, who was governor of the city during the siege of Derry in 1688. The column and statue were blown up by the IRA in 1973. Since then the remaining plinth has continued to be contentious.

“Last summer, petrol bombs were thrown at it,” says Alan Phelan, the Dublin-based artist whose RGB Hyacinth Bucket Challenge is a giant papier mache hyacinth that will grace the plinth later this year. A work by David Beattie will follow in 2021. “The Walker Plinth is a real site of interest for people who like to throw things,” Phelan adds.

He hopes that the collaborative nature of creating the sculpture may help to assure its longevity. “The flower will be made up of lots of little flowers,” he says. “I’m making an instruction video, you come into the Void Gallery on July 20th, and pick up your mould that’s made from a bucket, your paper and glue.”

The idea of making a hyacinth came from work Phelan had explored from a show last year at Dublin’s LAB gallery, and more recently at the RHA in an exhibition that Covid-19 put pause to, but which will be open to the public again over the last two weekends of July (rhagallery.ie).

“In the Victorian language of flowers, the hyacinth is connected to memory,” Phelan says. “And it’s also riddled with other associations. It’s about spring, renewal and regrowth. In Catholic imagery, it’s to do with prudence. In other spheres, it’s more phallic. In sport, it comes up in the myth of Apollo and Hyacinthus, who was killed by a discus aimed by the jealous Zephyrus.”

The launch of the sculpture on September 5th will be accompanied by excerpts from Mozart’s opera Apollo et Hyacinthus. “He wrote it at the age of 11,” says Phelan, wonderingly.

The Walker Plinth commissions were conceived long before the current wave of activism against perceived symbols of oppression.

“It is timely,” agrees Mary Cremin, director of Void. “I’ve been thinking about it since I moved to Derry three years ago. When I walk to work, I walk past the plinth. It overlooks the Bogside, and from every aspect of the city, you can see it. I wanted to activate the space.”

Together with Billy Moore of the Siege Museum, Cremin has been programming events at and on the plinth that are “universal rather than overtly political. Alan’s work is responding to Covid, and David’s looks at the river and climate. We’re trying to reimagine the plinth as a public space.”

As part of this process Cremin presented Phelan and Beattie’s proposals to the Apprentice Boys of Derry, who, she says, “have been receptive. It’s definitely a leap of faith for them, but they do like the idea of welcoming other communities into that space.”

Public sculpture survives by consent. Whether it’s a memorial to an otherwise long-forgotten general, or a more abstract art work, neglecting to anticipate or engage with the idea of consent has been the downfall of many a project.

When three of Antony Gormley’s signature human figures were sited on the Derry Walls in 1987, Gormley said he wanted the work to be “a poultice, and a benign piece that related to the feelings of the people in that place and their situation”. In a BBC interview, remembering the installation of the works, Gormley describes how “a sullen group of Protestant kids” met the work that was meant to relate to their feelings.

“They set the bonfire around it. The final act was throwing a tyre around its neck and then pouring petrol on it. Then throwing the petrol can onto the fire . . . This was excellent. This was the work as poultice throwing violence and evil onto itself that would otherwise be experienced in other ways.”

Another way of viewing it would be as work imposed on a community, and a community reacting against being told how to feel about themselves by an outside agent who didn’t get how having a looming figure, looking down on them from above, might inspire different, less poulticey feelings. The sculptures were ultimately removed. (In 2001, one was resited on the East Wall bastion, overlooking the Millennium Forum theatre.)

Other public artworks have fared better. Leo Higgins’s Home, at the junction of Buckingham Street and Sean MacDermott Street in Dublin’s north inner city, is a memorial to those who have died as a result of heroin. When the flame was cast, local people went to the foundry to throw mementoes of loved ones into the molten bronze. This sort of symbolism is not immediate to those who don’t know the story, yet it makes the memorial meaningful to those closest to it. It was unveiled in 2007 by then president Mary McAleese.

Thinking about commemorations has matured over time. In 1982, Maya Lin’s Memorial to Veterans of the Vietnam War rewrote the script, and made its own powerful mockery of all those grandiloquent bronze horsemen. A wall sunk into the ground in Washington DC is etched with the almost 60,000 names of the dead and missing. Lin made space for more to be added over time. It is a quiet place of contemplation and reflection, and manages the issue of how to commemorate something in which there is no black and white, only shades of grey.

The temporary nature of the Walker Plinth commissions echoes London’s very popular and engaging Fourth Plinth in Trafalgar Square, site of many memorable works, that are no less powerful for their lack of longevity. Gormley had a spot there, where he invited members of the public to spend time aloft, being the artwork themselves.

In 2010, Yinka Shonibare’s scale model of Nelson’s HMS Victory was sealed in a huge bottle, and bore batiked sails, testament to the wave of colonisation and concomitant responsibility to multiculturalism that came with Britain’s overseas victories. Unlike a bronze figure of Nelson himself, the work gave rise to plenty of fascinating thoughts and conversations, even among those who scratched their heads and wondered: yes, but is it art?

The Walker Plinth commissions are aiming to create a space for something similar.

“It’s trying to flip it on its head,” agrees Cremin. “You’re having this global movement, moving these statues, but what do you put in their place? They are symbols of oppression, so it’s a good thing they’re gone. You can’t expect things to stay the same, and our public spaces need to reflect that. You reflect your current society, not one of the past that was oppressive of certain sections, or of that tradition that said that one specific person can be held higher, that one person makes the action. What Alan and David are doing is more about collective action.”

The new Dublin City Council Sculpture Dublin, a significant public art initiative, launches with commissions of six artworks in the city, five permanent (in Ballyfermot, Bushy Park, Finglas, Smithfield Square and St Anne’s Park) and one temporary (the empty O’Connell Plinth outside City Hall), as well as a plan to make sculpture in the city more engaging. With the support of the Hugh Lane, and Visual Artists Ireland, the commissions will be awarded this year and realised in 2021.

Looking at the fate of many “permanent” public sculptures of the past, making something that people will have to live with, like it or not, is a tricky proposition. Watch this space.