Eugeen Van Mieghem: Docklands denizen who drew a world on the move 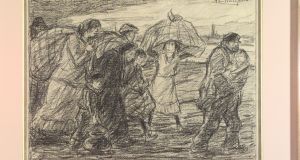 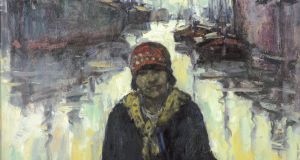 Sack Mender Before a Dock, 1926, Oil on canvas, 68 x 78cm. Image courtesy of the Province of Antwerp 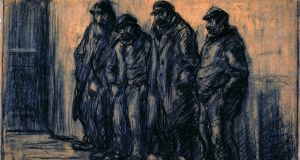 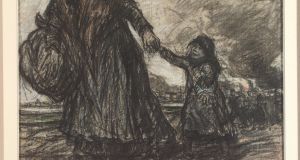 We know the past through books and art. Close my eyes, and Paris in the late 1800s is a place of Degas dancers, Manet’s A Bar at the Folies-Bergère, and the denizens of Toulouse-Lautrec’s louche night-time scenes. Arles is van Gogh – hot and yellow, with the occasional storm and starry night – while closer to home, and despite Santiago Calatrava’s incongruous bridge, Usher’s Island is haunted by the ghosts of James Joyce’s The Dead.

The subjects of art and literature linger longer in those emotional histories that shape our idea of the past and of the world. This also means those people and places not singled out by artists for focus can be forgotten. Frequently, because of the way artistic patronage worked, the subjects of art were the wealthy ones, or the scenes are those that most appealed to them. But one Belgian artist, born in 1875, spent a lifetime capturing the lives of ordinary people, leaving an incredible record behind.

Antwerp at the turn of the 19th century housed the second-largest port in the world, and Eugeen Van Mieghem grew up right on the quayside. His mother ran a tavern and his father worked on the docks. So Van Mieghem, who demonstrated a talent for drawing at an early age, grew up in the thick of noise, movement, poverty, industry, work and social upheaval at a time when sail was transitioning to steam.

It was also a time of emigration. Between 1873 and 1934, which was roughly the same as Van Mieghem’s own lifespan (he died in 1930), about two million people left Antwerp via the ships of the Red Star Line for new lives in the US and Canada. While some, including Albert Einstein, travelled first class, the vast majority were steerage passengers, thickly clustering the harbour before they boarded, fleeing oppression or seeking hope across the Atlantic.

Van Mieghem was obsessive about drawing. He was also penniless, and so his drawings, which have a fluid facility, can, like those of the best artists, evoke character and feeling in just a few lines. They cover diaries, invitation cards, the backs of letters, and the telegrams that were pinned up on the wall of The Widow Van Mieghem (the pub was renamed after the death of the artist’s father) announcing the arrival of ships. Visitors to Antwerp can find some of these at the Eugeen Van Mieghem Museum and, from February to June, at the Hugh Lane Gallery in Dublin.

The exhibition is being supported by Dublin Port, as part of its Port Perspectives programme, which also includes a series of commissions and sponsorships amounting to €300,000 this year. (The art commissions will be announced mid-February.) According to Eamonn O’Reilly, chief executive of Dublin Port, it’s part of an agenda to reconnect Dublin Port with the city.

“We don’t think there’s any necessary separation between the city and the port,” he says. “It wasn’t the case in Dublin in the past.”

He cites stories in James Joyce’s Dubliners, written during the same period that Van Mieghem was making his dockland paintings and drawings, where the port plays a part.

“We’re cheek by jowl with the city,” he says. “We can’t simply say ‘Ports are the most important thing’, even though we think that. We’ve got to remake this link, and integrate the port physically and culturally. That cultural link is key to get acceptance for what we want to do.”

What Dublin Port wants to do, of course, is expand, but with that, it is also expanding a cultural programme that in 2015 brought Cliona Harmey’s Dublin Ships project to the city and restored the Diving Bell on the Liffey. Last year the programme included the Starboard Home music series and, O’Reilly hints, could extend to theatre commissions for 2018.

It’s a rich ground for inspiration, as Van Mieghem’s art shows. According to Michael Dempsey at the Hugh Lane, who has curated this exhibition of 71 of the artist’s works, “It’s interesting from a social historical perspective. He’s looking at the conditions of labour and has an empathy for his community. He comes of the people, so you don’t have the romantic perspective of, say Seán Keating or Paul Henry. ”

Van Mieghem didn’t travel. He was poor, his wife was ill (there is a wonderful series of drawings of her in her illness, some of which will be shown in Dublin), but he soaked up the influences of any artists whose work came to be shown in Antwerp. You can see hints of Edvard Munch, Vincent van Gogh, Henri de Toulouse-Lautrec, and then more of the German artist Käthe Kollwitz, and Swiss Theophile-Alexandre Steinlen in his work, and yet his subject matter remains resolutely with the people of the port.

“He joined the Antwerp literary anarchist society De Kapel [The Chapel],” says Joos, “and wrote, in a letter to a [rare] collector, ‘Real artists stay poor.’”

Van Mieghem was most at home with drawing and with his looser studies for the larger oil paintings. But whether he’s drawing or painting the women of the docks (it was estimated that by 1900, 2,000 women worked alongside the men on the waterfront, not least because they had initially broken a strike in 1867, and would work for cheaper wages), the massive sail and steam ships clustering the harbour, the lines of emigrants awaiting departure, or his wife in sickness and in health, there’s a passionate intensity to his art.

The Kattendijk Dock in Winter

Van Mieghem didn’t travel in his lifetime, but, as Joos says, “the world came to him via the port. All those workers and steerage emigrants, he gave them a face.”

It’s a world of hard work, social upheaval, change and unrest. It’s also a world of departures. Part of Irish identity is defined by emigration, a sense of the diaspora and connections held across continents. Pockets of Irishness in other parts of the world are celebrated against the tragedies of emotional bonds severed and histories lost. It’s interesting that we can seem to find it harder to reverse this and understand the enriching process of migration: all those people lining up on Van Mieghem’s wharves, destined to become Americans; and today, all those people still on the move, looking to find a place to call home.

Eugeen Van Mieghem: Port Life is at the Hugh Lane from February 9th to June 11th, and is part of Migrations, a thematic strand at the gallery for 2017. A programme of talks accompanies the exhibition, see hughlane.ie