Bits of shark and a barrister’s wig: there is no mistaking Cross’s work 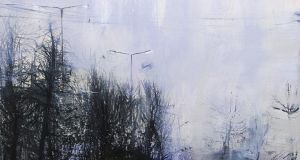 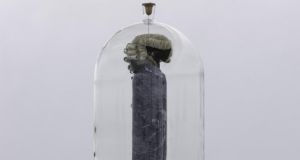 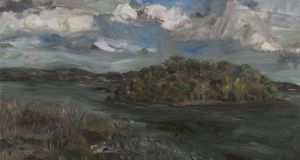 The View referred to in the title of Dorothy Cross’s exhibition at the Kerlin has more than one meaning for her. It is, first and foremost, a view in the conventional, picturesque sense. On the southern, seaward edge of Killary Harbour, she lives and works slap-bang in the middle of a view. The assumption is that the prospect of ocean, shore, island and huge skies will manifest itself in her work as a representation. “But I feel that I struggle as an artist surrounded by such natural beauty because I could never compete with it.”

In fact, we can see her view in the show, bathed in the warm glow of a radiant sunset. “But,” she says, “it’s a photograph, a purely factual photograph – I never use Photoshop or, say, manipulate the colour in any way. I think it’s not appropriate for me to depict it by painting or drawing, that’s just not what I do, not the way I work. I like to deal directly with what exists, with what’s already there, rather than painting something that is there.”

So the view is just that, conveyed as directly as possible. As such, it feeds into, shapes and informs everything we see, but she has another kind of view in mind: “The idea of point of view.” That idea is the catalyst for much of what we see in the gallery.

Many years ago she chanced upon a human skull that had been used as an anatomical specimen in medical school. She sold it to a medical student, but recently went in search of it and regained it. Sections of it are used in two pieces. In one, Scales, two lobes are suspended from a clothes hanger. They are gilded with yellow gold and contain little fragments of meteorite. Cross’s rationale is concise: “For me, the clothes hanger refers to the body, the human presence; the two sides of the skull to the idea of the rational and intuitive sides of the brain, and the balancing act between them.” The fragments of meteorite introduce another shift in viewpoint: “From the terrestrial to the celestial.”

Another piece, Distil, employs an outsized bell jar once used in a distillery. It contains a column of grey marble topped by a barrister’s wig. “What matters is that the stone is not black or white, but grey.”

Is she implying barristers see things in shades of grey?

“In a way, yes. A barrister will distil the complexities of a case into one line of interpretation, to argue in line with the client’s interests.” And, as she says, the truth is in fact usually grey.

While everything in View registers strongly as an individual piece, and several of them are exceptional, it also works as an overall installation, not least as natural light from a window in the gallery’s end wall, usually blocked out, is allowed to flood in.

Light, this time from the stained glass window of St Carthage Hall in Lismore, formerly a church, is central to Cross’s other current show, Eye of Shark. It is a single, intensely atmospheric installation.

Coloured light falls on an unusual congregation – nine rusting iron bathtubs lined up in the church. In each, a ring of gold marks a scum line, another of Cross’s pungent bodily metaphors: “The intimacy of washing and the cleansing rituals of religion,” she observes.

In place of the eye of God she has secreted a shark’s eye in the wall. “You can’t see it,” she notes, “but trust me, it’s there. Just as the shark is there, unseen, below the water line. The shark is a powerful symbol. I was thinking about the way we project our fear of annihilation on to it.” View runs until October 18. kerlin.ie.

The term “civic collection” sounds worthy and a little dull. But, thanks to the efforts of the late Fergus Aherne, who was instrumental in establishing an annual exhibition and the collection more than 25 years ago, Boyle set a standard for what a small town could achieve. This show is in large part a tribute to Aherne. As the 20-plus works demonstrate, the town has acquired pieces carefully, widely and well. There are good examples of the work of many of the best painters of the period, including Eithne Jordan, Barrie Cooke, Basil Blackshaw and Nick Miller.

***
Patricia Burns has shown a flair for capturing what might be termed the melancholy of the suburbs. Or more, the ragged edges of the suburbs: the uneasy stand-off between urban and rural. In her first solo show at the Taylor, she concentrates on another anomalous terrain: the motorway landscape seen in transit, specifically the roads between Dublin and Cork. An air of concentration is accentuated by the way that the whole body of work could be describing a single journey, because we are always in a misty, damp, half-lit realm from which stands of conifers appear and fade or fields blur into nothingness. Headlight beams are photographically smeared, luminous lines. There’s a certain phantasmagoric lift to the imagery, made with thin washes of oil paint and flushes of colour, that recalls Elizabeth Magill. The mood is reflective, slightly tense and uneasy. If the show seems a bit repetitive, Burns is to be applauded for staying the course.

Coronavirus: How can philosophy help us in this time of crisis?
9 Miracle warnings and a lack of bull
10