Conceptual art: a walk in the park

Merrion Square has a selection of sharp, new, modern sculptures – and one buried secret 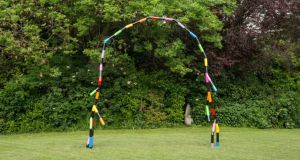 Playful: Someone and Someone by Eva Rothschild from the exhibition Vestibule in Merrion Square Park, Dublin. Photograph: Evan Buggle. 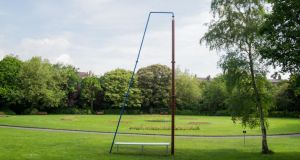 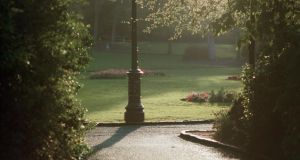 If you venture into the park on Merrion Square in Dublin through the summer months, you’ll find some temporary additions to the usual sculptural tenants and the paintings on the railings. Joining Danny Osborne’s popular monument to Oscar Wilde and Arthur O’Connor’s bronze figure group, works by three contemporary artists – Daniel Gustav Cramer, Aleana Egan and Eva Rothschild – will be in residence. Each artist will also exhibit in a cultural venue next to the square: the Goethe Institut, the Irish Architectural Archive and the National Gallery of Ireland, respectively.

All are part of Vestibule, a project curated by Aoife Tunney and backed by the Arts Council, Dublin City Council and the Goethe. As Tunney explains it: “In Georgian architecture the vestibule is an antechamber you enter before the actual building.” She visualises the park as being a kind of vestibule to the surrounding array of Georgian buildings. More figuratively, because the venues are both outside and inside, she suggests a link between the exterior and the interior, the real and the imagined, the conscious and the subconscious.

The park is a site of freedom and relaxation in the midst of the urban constraints of business and domesticity. Tunney hopes to amplify that quality, to encourage people to explore inner worlds. In a way this idea is most starkly expressed in Daniel Gustav Cramer’s Sphere.

Starting from a photographic background, Cramer, who was born in Dusseldorf and is based in Berlin, has built an international profile through a series of thoughtful conceptual pieces. Earlier this year, for example, his installation 01-72 involved situating 72 sequential photographs of a stretch of seawater throughout an apartment building in Basel. If you followed the sequence image by image, your progress through the building approximated to the original time lag between each photograph. That gives the flavour of his sensibility. For Vestibule, his Sphere is an iron sphere. It is in the park but invisible, as it’s buried in the ground.

At this point many people may roll their eyes, but bear with him. Go to The Return, the exhibition space at the Goethe Institut, and you’ll find a framed text that describes the sphere and indicates its position in the park. It’s central to Cramer’s idea that the sphere remains invisible for the duration of the exhibition. He’s interested in the connection between the unseen and our awareness of it. “I believe,” he says, “that this work is ultimately celebrating, and making visible, the park itself . . . I think one could argue that the subject of this work . . . is Merrion Square, with all its paths, flowers, people passing through; its history.”

Eva Rothschild’s work in the park, Someone and Someone, is certainly visible, although you can walk through it: it’s in the form of an arch. Or, rather, it takes the idea of a ceremonial arch, something heavy and pompous, and makes something playful and circus-like from it. A somewhat bockety-looking structure composed of tubular sections on which black alternates with bright party colours, it’s likely to engender both smiles and a certain unease: just how precarious is it?

In fact it’s a robust construction, but that edge of uncertainly is typical of Rothschild. Born in Dublin, she lives and works in London, and a major survey show of her work is now open at Dublin City Gallery the Hugh Lane. She has been described as a postminimalist sculptor. That is to say she uses the language of minimalism but undercuts and revises it. She uses industrial and functional materials, such as aluminium and patent leather, but rather then making abstract, geometric forms, she muddies and humanises minimalism’s pure, austere aesthetic.

As she sees it, Someone and Someone “is quite a hard, industrially fabricated piece, but the colour and the arch create a more sympathetic overall presence. I initially conceived it as a possible meeting place, a place of rest or hesitation within a continually active environment – which is, I guess, on a smaller scale, the function a park performs.”

A companion piece at the National Gallery, Good Times, is a beautiful aluminium and fibreglass ring of banded colours. It could be seen as a playful reworking of Isamu Noguchi’s classic sculpture The Sun at Noon, a flawlessly carved ring consisting of alternating bands of French red and Alicante marble.

Also Dublin-born, Aleanna Egan once made a series of videos of people reading from their favourite books. The experience of reading, especially the connection between inner and outer worlds, or the transition from one to the other, is central to her sculptures and installations. She doesn’t illustrate particular scenes or books, but she has acknowledged the importance of Iris Murdoch and Henry James, and the syntactical precision of the latter comes to mind in relation to her use of form and material.

She mostly avoids straightforwardly geometric shapes, opting for the more idiosyncratic and oblique. But, at the same time, everything she makes, whether in steel or painted cardboard, is very exact. Understudy is a soaring steel structure that incorporates seating. Egan sees the piece as both drawing on elements of the surrounding environment, extending to Grand Canal Basin and the Docklands, and echoing the shape of the square, creating an open space within an open space. She has also produced a printed poster, available at the Irish Architectural Archive.

The idea is that the sculptural core of Vestibule will anchor some related events. A series of children’s workshops, the Square School, form part of the programme, conducted by the artists Rhona Byrne, David Beattie and Kevin Kirwan, next Thursday and on September 11th. Walking tours are scheduled for June 26th and July 24th, and Maria Somerville and White Collar Boy headline a concert on August 23rd from 4pm to 9pm.

Vestibule is on show in Merrion Square Park until September 20th. The satellite exhibitions at the Goethe Institut Ireland, the Irish Architectural Archive and the National Gallery of Ireland run until July 30th; vestibuleprojects.tumblr.com