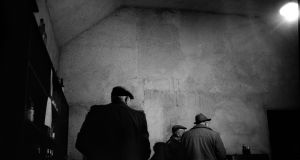 A photograph from the exhibition The Light Gleams an Instant

Lightly built, with a relaxed manner and a watchful, gentle demeanour, Danish photographer Krass Clement was in Ireland recently for the opening of an exhibition of his work at the Gallery of Photography featuring two bodies of work, both made in a short period of time in 1991. One depicts a slice of life in the village of Drum, Co Monaghan, and the other Dublin city.

His book Drum was published in 1996, and is a photobook classic. All the images in it were, famously, shot in the course of one evening. His Dublin photographs, never before seen, are gathered in a new book titled simply Dublin.

Born in Copenhagen in 1946, Clement spent much of his childhood in Paris. His father was a painter and his mother a pianist. During his teens he began to take photographs in earnest, picking up some freelance assignments.

Having studied cinematography at Denmark’s National Film School, he decided that film direction was not for him and turned again to photography. Since the late 1970s he has exhibited his work regularly, and produced a succession of highly regarded publications.

He is in the mould of the old-school street photographer: a flâneur with a camera, plus a dash of Scandinavian melancholy.

Early in 1991 he was invited to undertake a one-month artist’s residency at the Tyrone Guthrie Centre in Annaghmakerrig, Co Monaghan. He had never been to Ireland. “For some time I had been attracted by the idea of visiting Dublin. Then suddenly I was offered this residency.”

Why Dublin? He saw it as different but comparable to the situation of several Scandinavian cities, including his own, Copenhagen, as being out on the edge of Europe, relatively isolated. And Dublin’s association with James Joyce gave it a literary appeal that attracted him.

Arriving in winter, he stayed overnight in the city. “It was dark. I was staying in a small hotel – I think it was called the North Star. ”

He took his camera, the classic street photographer’s Leica with a fixed lens, and wandered the streets. The fabric of the place was hard, not particularly hospitable. “I was a bit scared, but also drawn to the atmosphere.”

His first photographs were taken by night, with few people around and a slight chilly mist in the air. He was to drive to Annaghmakerrig the next morning and before he left he wandered around for a while and took more photographs.

“I was greeted as an artist at Annaghmakerrig, which was very nice. But I had this feeling: what am I going to do here.” There was no onus on him to do anything: he was in an artists’ retreat, but he did explore and take photographs in the locality and, on several occasions, he drove down to Dublin for the day and wandered through the streets with his camera – always on the north side, he notes.

It was still a pre-digital time. He shot on 35mm film. “You had no idea what you had until you developed the film and printed up contact sheets,” he said. And he did not develop his Irish work until he was back in Denmark.

Some of his fellow residents at Annaghmakerrig had mentioned to him that he should go to Drum, which they described in unflattering terms and, just before he left, he drove there one evening. “I was struck by the strange beauty of the place. And of the people.”

After looking around he went into the local pub. He ordered a drink and talked to the publican. Local men sat around in small groups. It was, he recalls, like a stage set. “Like Beckett. And then the door opened and the main character comes in.”

The main character was a man with a torn, patched overcoat. Clement was immediately struck by his big, craggy features and his bearing. “He seemed to carry a burden. It was sort of biblical; there was something sacred about him. He was alone, and you felt he preferred to be alone. But there was no tension, no feeling that he did not belong.”

At one point the man seems to take an interest in an adjacent conversation, but he immediately retreats into himself. He was both part of the community and apart from it.

Clement was taking photographs all the time, though not that many: “I only had a few rolls of film in my pocket.”

It’s remarkable, looking at the photographs now, that the men he was photographing appear completely unselfconscious, and don’t look towards him or the camera lens. He thinks his conversation with the publican (both of them had lost their mothers, as it happened, in the last year) established his credentials among the customers, and they just left him alone.

The evening was shaped by the arrival of the stranger, the puzzle of his separateness and his departure. That spare tale has an extraordinary, Beckettian richness in Clement’s photographs. “There was a sense of something hidden, a drama under the surface, an untold story. I think I identified with him as an outsider.”

At home in Denmark he looked at the contact sheets. He was struck by the formal clarity of the sequence of images, but several years passed before he managed to organise and publish them as a book, to considerable acclaim.

Photobooks are his preferred medium and it was ideal for Drum. The book is regarded as a landmark photobook, and the first edition is a costly collectors’ item. As he notes, without knowing it then, he learned a great deal that evening.

“A lot of Drum is one image repeated. Things might change within it but it is the same image. Afterwards I knew that you must use such repetition to make the drama visible.”

Most obviously, he went on to create a similar body of work in a small Danish town. “It has something of the same atmosphere but…,” he smiles, “Danes are more reserved than the Irish. It’s more photographs of individual figures sitting alone in their houses.”

The Gallery of Photography’s invitation to revisit Drum 25 years on brought one of two surprises (the discovery that one of the men in the bar was the father of arts minister Heather Humphreys, for example), and spurred him to revisit the Dublin photographs from the same Irish visit. They had never gotten beyond contact sheets. Suddenly he was in the position of making an exhibition and, as it transpired, a new book, based on photographs taken 25 years previously.

The book Dublin,and the body of work are not, he emphasises “a document about Dublin”. Rather than being a systematic portrait of the city at that time; the photographs convey “my feeling at encountering places and people in the city”.

It was winter, and there is a certain bleakness to many of the images. The streets and facades are bare and scoured, the signage worn. There’s often a wary defensiveness to the people, and the light, when it’s there at all, is cold and mean.

Pictorially, Clement has a great instinct for telling facial expressions and bodily attitudes, and a liking for expansive atmospheric backgrounds.

Several people have asked him, he remarks, whether he came to photograph the city at that point because he knew it was going to change. He shrugs and smiles. “I had to tell them that, walking around now, my impression is that Dublin has not really changed so much.”

The Light Gleams an Instant: Krass Clement is at the Gallery of Photography, Meeting House Square, Temple Bar, Dublin, until January 22, galleryofphotography.ie. Dublin, by Krass Clement, is published by RRB Photobooks and is €45 in the Gallery Bookshop