Disparate, arresting . . . these works reveal the diversity inherent in the genre of portraiture 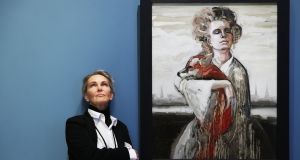 Zane Sutra beside her portrait on the wall of the National Gallery of Ireland as part of the Hennessy Portrait Prize. Photograph: Leon Farrell/Photocall Ireland.

This year’s Hennessy Portrait Prize exhibition of shortlisted artists has an expanded space at its disposal. It has, in fact, most of the Portrait Gallery, which reopened last June after the National Gallery of Ireland’s (NGI) extensive refurbishment programme.

In the process, the shortlist has expanded – more or less doubled – into something closer to a longlist, with work by 24 artists occupying the gallery’s handsome series of bays.

This increased exposure highlights something that has been true of the Prize since its inception in 2014: it has yet to achieve a critical mass of qualitative entries. Each instalment has been fortunate in having a core of substantial contenders and worthy winners, but beyond the core, it quickly starts to look shaky.

Broadening the exhibition underlines this, so too does the auspicious setting. If you enter the gallery from Merrion Square and make your way through the Grand Gallery and up the sweeping staircase, you’ll pass some great portraits from earlier centuries.

Then you’re in the Portrait Gallery and the careful presentation and clear, generous light can, all being well, greatly enhance a work or, on the other hand, be ruthlessly revealing of shortcomings.

This is not to imply that there is one, unambiguous model and standard to aim for when making a portrait, but a work must deliver on its own terms.  Visit the RHA Annual Exhibition any year and you’ll encounter a mixed crop of portraits. Whether you warm to any individual piece is a matter of taste and personal judgment, but usually the artist has invested significantly. Maximum levels of available time, energy, skill and talent have been applied. Increasingly, the academy has embraced photography as well. For whatever reason, the Hennessy Portrait Prize does not yet seem to have drawn a comparable general level of applications despite individual high points.

The first winner, in 2014, was an established artist and a renowned portrait painter, Nick Miller

This is puzzling as it is a generous award, worth €15,000 plus a €5,000 commission for a work to be included in the National Portrait Collection, plus two €1,500 awards for runners up.  It could be that many established artists are uneasy about setting their work up for unpredictable judgment: imagine not making the cut? Possibly so. Perhaps they are busy and don’t need the accolade or the money. Unlikely enough, really. The first winner, in 2014, was an established artist and a renowned portrait painter, Nick Miller for a beautifully sensitive portrait of his friend, the artists Barrie Cooke.

Thereafter the quality of the prizewinners doesn’t suffer but the artists are younger, at an earlier stage of their careers: the extraordinarily capable and versatile Vera Klute (she is shortlisted again this year, for an animated self-portrait drawing) and the young, highly regarded (and rightly so) Gerry Davis.  This year’s winner is announced at 7pm on November 28th. NGI director Sean Rainbird summarises the show: “Disparate, arresting and in some cases challenging, these works reveal the diversity inherent in the genre of portraiture.”

Mostly, with just a few exceptions, they don’t stretch or challenge a straightforward definition of the portrait. Not that they should, but Tom O’Dea does. His Self Portrait SNP consists of a mass of unspooled printer paper, bearing his decoded genetic information in the form of “complete Single Nucleotide Pair differences from the reference human genome”. His description does not make clear that the printout is a genetic blueprint for Tom O’Dea, which would be a fascinating idea, but it’s effective and arresting.

Detail is taken as indicative of veracity, at least on the part of a significant proportion of most audiences

Bob Campbell’s Cosmic Kitchen stretches things a bit, too, though it may be more allegory than portrait. A virtuoso piece of representational painting on a plaster egg recounts “A night in my friend’s kitchen.” Domestic details are transmuted into a cosmic scheme. Engagingly, “a strange fish” swims close to the “cosmic egg” in a work that recalls the ingenuity of a previously shortlisted artist, Catherine Barron. In a way it also connects with Klute’s amazing animation, a blinking, breathing, slightly disturbing drawing that also alludes to domestic containment and the passing of time.

Two recurrent characteristics emerge in the show. One is a preoccupation with fine detail, largely for its own sake. Detail is taken as indicative of veracity, at least on the part of a significant proportion of most audiences. Another is to approach a portrait as a graphic design project. Sometimes the two coincide.

Gordon Harris’s Kids’ Canvas is a mammoth, microscopic close-up of his own head embellished with his children’s drawings. Kyle Barnes offers a closely related variation on that idea by using paint applied to his sitter to “reveal a little more of the inner person”.

Eoghan McGrath’s dizzying image looks to “early Flemish portrait painters”. He could have added MC Escher. Jack Hickey’s My Time is adeptly made but slick. It looks as if Shane Berkery projected an image of cherry blossom onto a figure for his Lady and the Cherry Blossoms, which has the feel of an album cover about it.

Several pieces are almost very good but stumble before they quite cross the finishing line, often but by no means always for technical reasons. For example, Aileen Conroy’s frank self-portrait head, Sean McGuill’s pencil self-portrait, Bernice Guckian’s drawing made partly by burning into birch ply, Myra Jago’s quizzical self-portrait, Ivan Matancevic’s Nastasa (imagine Alex Katz in wintry Ireland) or Nicholas Benedict Robinson’s double portrait of his parents, technically proficient to an impressive degree. As is Benita Stoney’s Tommy. Zane Sutra aims for bravura but doesn’t quite make it. Jacinta Guinan’s admirably spare understatement is let down only by a tiny technical lapse or two, but it’s a powerful image.

David Hamilton’s almost equally spare portrait of a fellow hospital patient is compelling and honest. Eilish McCann’s monoprint of her son is a beautiful, elegantly stated sketch, but a sketch. Comhghall Casey paints a self-portrait every year: straightforward, skilled, with not fetishisation of detail.

Is it fair to say that one would need to see more in relation to impressive photographs by David Creedon and Gerard Jefferson-Lewis. Cian McLoughlin’s Tronies are his best works to date. Kenneth O’Halloran has a track record as a  photographic artist and photographer and his Winnie Lawrence is an excellent, classical portrait study.