Donald Clarke: Choose your friends, clothes and politics wisely. They’ll come back to haunt you 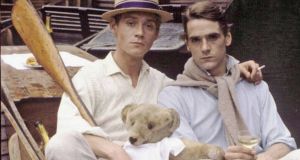 They’ll have a field day with this when Facebook is invented: Anthony Andrews and Jeremy Irons in ‘Brideshead Revisited’

The time when media fatheads humblebrag about doing badly in their Leaving Certificate has passed. We are now in the later stages of an equally infuriating season. For the last week or so, the same jerks have been offering unasked-for advice to those heading off to college. They hope they sound like near-contemporaries who still have a grasp of undergraduate priorities. Be nice. Don’t tell them they sound more like that dithery granddad in the Werther’s Original commercial.

“Cherish every moment,” is something they say a lot. “Don’t leave revision to the last moment,” others tell those reading Improbable Studies at the University of Narnia. None offers any really useful advice. None says the following: “If it’s 1983 and, after six hours in O’Neill’s of Suffolk Street, you fall unconscious in College Park, don’t expect Dennis Bland [name changed on legal advice] to so much as turn you over before slumping off in hopeless pursuit of Sally Cortisone [and again]. You’re on your own, pal. If you survive without going the way of Jimi Hendrix then your only comfort will be the satisfaction of seeing Dennis getting trapped in a loveless marriage before the turn of the millennium.”

They don’t say that. It’s all wistful stuff about not allowing early homesickness to overpower life’s great adventure. There’s waffle about making the most of the exciting societies at your university. As with the Leaving Cert garbage, there’s always a bit of humblebragging. “I failed all my exams, made no friends, got dunked in the canal and still grew up to host the Drivetime slot on Honk FM. Honk!” We’ve been here before.

More often, however, a sense is conveyed that this is the last chance of uninhibited happiness you are likely to encounter. After university, it’s a wretched stagger into responsibility, fractured ambition and declining libido. Apparently, soldiers in wars often end up making the same complaint after demob. Life loses its vivacity. It becomes hard to settle upon a direction. University is like war, but with worse food and fewer opportunities to get shot in the face. “That was the last time I felt alive,” your dad won’t exactly say. “Then I had to settle down to the miserable business of work, debt and raising you. The least thing you could do is let me live vicariously through your undergraduate experiences.”

You are probably required to remain in the same room when your parents are offering their wisdom. Unless you’re a bigger fool than I take you to be, you won’t offer even that much respect to anonymous advice offered on the telly, through social media or in this column.

So I’ll direct my advice to the wind. Take your early choices seriously. Take them seriously because you’re going to be stuck with them for the rest of your miserable life. I don’t mean choices about what course you take or how seriously you approach examinations. You’ll either get a job or you won’t get a job. We’ve made such an unholy shambles of the world that the most you can hope for professionally is to be the person selling the tastiest rats after the apocalypse.

Here’s the skinny. Be serious when deciding who to befriend, what music to like, what political party to patronise, what clothes to wear and how you cut your hair. None of these things now go away.

This used to be a little easier. It was always true that the same dreary mob of friends would follow a person around through university, on to first jobs and further onwards into middle age and decrepitude. You see that in every bildungsroman of note. One friendly word to a stray oddball at the Bowling Society meet-and-greet dooms you to a miserable catch-up dinner in Nando’s 30 years later.

Somebody was forever likely to remember your early passion for progressive rock or German lounge music, but, in the olden times (that’s to say, before 2008 or so), these minor infringements against future fashion rarely slipped outside a tight circle of unshakable associates.

Social media has changed all that. In a twist cruel enough to spring from the mind of Philip K Dick, the technology retrospectively affects even those who attended university when a “portable computer” looked like the monolith from 2001: A Space Odyssey. Decades later, we wake up to photographs of us appearing in bad productions of Salad Days, sleeping drunkenly underneath benches and – this is you, not me – handing out leaflets decorated with the face of Enver Hoxha. Thanks a bunch, Mark Zuckerberg. I wish somebody had given you some advice when going to Harvard. I wish they’d told you to keep your stupid ideas to yourself and spend your time playing Dungeons & Dragons.

Not that anybody is listening.