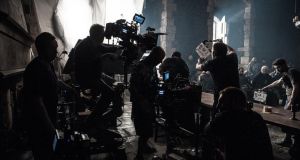 Game of Thrones: much of the series was filmed in Northern Ireland, where abortion is banned from the moment of conception. Photograph: Netflix

The Stormont-funded Northern Ireland Screen agency says it does not support a boycott of TV and film production in Northern Ireland because of its strict abortion laws – but does back actors and others who say they will continue to work in the North while calling out “that which they believe must change”.

Netflix and Disney are threatening to pull film production from the US state of Georgia because of its newly restrictive stance on abortion. WarnerMedia also says it will reconsider Georgia as a production location.

But Netflix would not comment today on whether it would take a similar approach to Northern Ireland, where women face even tighter restrictions on reproductive rights, and where it has filmed the gameshow Flinch, is coproducing the drama Marcella with ITV and made the Miami Showband Massacre documentary.

Disney has not responded to an Irish Times request for comment on its stance towards Northern Ireland, where it has recently filmed scenes for the forthcoming Artemis Fowl film.

Georgia’s “heartbeat Bill”, which has prompted a growing boycott from actors and many others in the entertainment industry, would ban women from seeking an abortion after a foetal heartbeat was detectable, in the sixth week of pregnancy. Northern Ireland’s long-standing ban on abortion is absolute from the moment of conception, with anyone obtaining an abortion theoretically facing life imprisonment.

Just to state I would never boycott working in NI, I absolutely love working there and feel like my time is better spent supporting the women there by speaking out in interviews, protesting (As @siobhni and I did on Westminster) etc
Just saying these actors shouldn’t ignore NI

“It shouldn’t be one rule for Georgia and one rule for Northern Ireland,” Emma Campbell, of the Northern Irish campaign group Alliance for Choice, says. “There needs to be some consistency,” she adds, suggesting there is often a “blind spot” when it comes to the reality of life for women in Northern Ireland, who have to travel abroad for a termination. “Companies like Disney making a public statement could put political pressure on in a way that an activist group like ourselves just can’t.”

The Derry Girls actor Nicola Coughlan said this week she opposes a boycott. Noting the growing number of US actors signing a letter saying they wouldn’t work in Georgia because of its proposed abortion laws, she tweeted on Wednesday: “while I think this is a worthy protest are they going to extend this to the UK too seeing as Northern Ireland has a complete ban on abortion?”

She said “I would never boycott working in NI, I absolutely love working there and feel like my time is better spent supporting the women there by speaking out in interviews, protesting... Just saying these actors shouldn’t ignore NI.”

Northern Ireland’s film and television industry has boomed in recent years on the back of the HBO series Game of Thrones, much of which was filmed there, and which put Northern Ireland on the film- and TV-making map internationally. Sky broadcast its final series this month.

Sophie Turner, who played Sansa Stark in the series, has said she signed the public pledge to no longer work in US states with strict abortion laws. When it was pointed out she had filmed eight series of Game of Thrones in Northern Ireland, she said “luckily we’re moving on”.

The BBC hit crime drama Line of Duty, which is set in the English midlands but filmed in Belfast, has had a “fantastic home” in the North, its writer, Jed Mercurio, has said. “It’s got great locations. We are incredibly grateful for the hospitality we’ve received here.” When contacted today, the BBC declined to comment on the issue of using Northern Ireland for television locations. It recently aired the fifth series of Line of Duty. – Additional reporting by the Guardian