The writer left the country he loathed when he was 18 to move to Paris, and became a key figure in the city’s artistic community 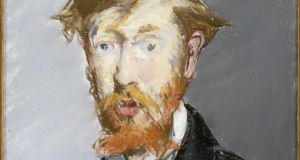 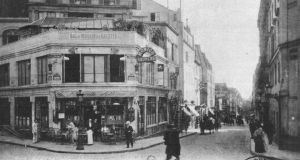 A photograph of the Cafe Nouvelle Athènes, where Moore spent a lot of time, circa 1900 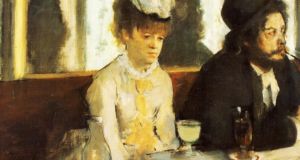 The Absinthe Drinker by Degas, which depicts the Cafe Nouvelle Athènes

The Irish writer George Moore (1852-1933) said Paris was his “Oxford and Cambridge”. Although he inhabited the French capital for only seven years, from 1873 until 1880, Paris was the city where Moore created himself.

Moore inherited his family’s estate in Co Mayo at the age of 18. On reaching majority three years later, he entrusted the estate to his brother Maurice and moved to Paris, with the intention of becoming a painter.

Moore initially sought out the establishment painter Alexandre Cabanel, whose frothy Birth of Venus, now in the Orsay museum, was purchased by Napoleon III at the Salon of 1863. Émile Zola, who would become a father figure to Moore, mocked the painting: “The goddess, drowned in a sea of milk, resembles a delicious courtesan, but not of flesh and blood – that would be indecent – but made of a sort of pink and white marzipan.”

Gifted with a flair for the avant-garde, Moore turned his back on the Académie des Beaux-Arts to join the nascent Impressionist movement. He then abandoned the paintbrush for the pen to become the leading propagandist for French Impressionism and literary realism in the English-speaking world.

“If you were looking for someone to defend the cause of French culture, you would not expect a member of the landed gentry from Co Mayo; it was most unlikely,” says David Rose, a retired literature professor from Goldsmiths, University of London, now president of the Société Oscar Wilde in Paris. “Wilde too promoted French literature, but for him it was a form of self-promotion. With Moore, it was a genuine commitment.”

Rose was attending George Moore’s Paris and His Ongoing French Connections, a three-day conference at the Irish College in early October. This was the sixth international Moore conference since 2005. A seventh will be held at the Princess Grace Library in Monaco next year.

Adrian Frazier’s biography of Moore is the bible of Moore scholars. The professor from NUI Galway wrote that Moore never gained the recognition he deserved because “he had no clear affiliation during his life with any single national tradition; no country has wished to claim him . . . By turns, he was treated as too sexy and French, or too rebellious and Irish.”

Self-hating Irishman
Moore was, by his own admission, a self-hating Irishman. Pierre Joannon, Ireland’s consul general on the Côte d’Azur and a scholar of all things Irish, quoted Moore’s reference to “an original hatred of my native country, and a brutal loathing of the religion I was brought up in” in his keynote lecture.

Joannon compared three writers who published works on Ireland in France in 1886-1887. In his Lettres sur l’Irlande, serialised by Le Figaro, Moore excoriated rich and poor. “Vice, degradation, hard-heartedness grow on every branch” of the landed classes “like blackberries in an autumn hedge”, Joannon quoted Moore as writing. The Irish peasant, Moore wrote, was “grossly superstitious, stupidly improvident, and he breeds blindly like a newt in the wet and slime”.

Ambassador Rory Montgomery pointed out that many Irish writers have been highly critical of Ireland. “We have to accept this as part of the tapestry of our culture,” he said. Moore, he continued, “seemed to revel in controversy”. He was “a Catholic who became a Protestant but also wrote a novel envisaging a non-divine Christ; an important contributor to the Celtic Revival who then satirised and mocked some of its leading personalities; an exponent of sexual frankness in the prudish worlds of late Victorian England and Ireland; a transmitter of French ideas into the Anglosphere”.

Moore described the importance of the cafe to French civilisation: “In the Middle Ages, young men went in search of the Grail,” he wrote. “Today the cafe is the quest of a young man in search of artistic education.” He found the cafes of the Latin Quarter noisy and out of fashion, so “I immigrated to Montmartre . . . One evening I discovered the ideal cafe on the Place Pigalle. I cannot say now if it were instinct that guided me there, or if perchance I met someone who told me that Manet spent his evenings in the cafe of the Nouvelle Athènes.”

Tours of the Musée d’Orsay
The art historian and museum guide Caroline Rossiter led conference participants on tours of the Musée d’Orsay and through the Impressionist quarter of Paris in the ninth arrondissement. We started on the Place Pigalle, facing the Bio c’Bon organic food shop which has replaced the Nouvelle Athènes, where Degas painted his famous Absinthe Drinker. The slant of the façade is the only vestige of the 19th-century cradle of Impressionism.

A few blocks away, at 61 rue Condorcet, Moore decorated his apartment in the exotic fashion of his French artist friends, with bright red cloth hung from the ceiling like a tent, Turkish divans, lamps and a pet python. Our tour ended at number 28 passage des Panoramas, the former Académie Julian, where Moore studied painting. Today, a plaster statue of a nude man stands in the entry, with a sign advertising “the most ancient Roman sauna in Paris”. George Moore would have surely approved.

At the Nouvelle Athènes, Moore waited for the sound of the glass door grating on the sanded floor as Manet entered. “Two tables in the right hand corner were reserved for Manet and Degas and for their circle of admirers . . . Evening after evening went by and I did not dare to speak to him, nor did he speak to me, until one evening – thrice happy evening! As I sat thinking of him, pretending to be busy correcting proofs, he asked me if the conversation of the cafe did not distract my attention, and I answered: ‘Not at all, I was thinking of your painting’.”

Manet drew and painted Moore several times. “There is no Englishman that occupies the place you do in Paris,” Manet told the Irishman. Through Manet, Moore met Zola and a host of models, courtesans and writers whom he turned into characters in his own fiction.

Moore’s appraisals of late 19th-century painters indelibly marked art criticism. He quoted Monet saying “How like Manet was to his painting.” What Manet saw, Moore wrote, “he stated candidly, almost innocently . . . The word ‘unashamed’ perhaps explains Manet’s art better than any other.”

“Still today, most writings about Degas quote George Moore,” said Isabelle Enaud-Lechien of the University of Lille: “For example, that he viewed nudes through the keyhole; that dancers were a pretext for drawing.”

In his keynote address on George Moore, Maud Gonne and the Dreyfus affair, Adrian Frazier recounted the ugly role played by the father of Gonne’s children, Lucien Millevoye, whom Frazier described as “a bizarre, detestable, larger-than-life human monster”.

A deputy in the national assembly and the owner of the anti-Semitic newspaper La Patrie, Millevoye actively campaigned against Alfred Dreyfus, a Jewish French army captain who was falsely convicted of selling French military secrets to Germany.

J’Accuse
Frazier called Zola’s “J’Accuse!”, in which the writer denounced the framing of Dreyfus, “The greatest headline and greatest piece of polemical journalism ever written”. Zola was found guilty of treason and went into hiding in England, where Moore visited him.

In Paris in the summer of 1898, Moore asked his friend, the painter Jacques-Émile Blanche, to organise a dinner with Maurice Barres, the right-wing writer who said he “deduced Dreyfus was guilty . . . from his race”. Moore got up during dinner, Frazier recounted, “grabbed Barres and threw a napkin in his face, then left the room. Monsieur and Madame Barres said they would never again accept an invitation to dine with George Moore.”

Frazier believes that Moore’s subsequent falling out with members of the Celtic Revival was rooted in his disgust with the anti-Semitic, conservative, Catholic nationalism espoused by Barres, Millevoye and Gonne – who sought to spread the same ideas in Ireland.

“George Moore’s explosive encounter at Blanche’s dinner table with a certain kind of French republicanism is a prelude to Moore’s experience when he came to Ireland,” Frazier said.

Moore was a lifelong, unabashed Francophile. “Everyone must go to France. France is the source of all the arts,” he wrote. “Inquire and you will find that whoever seems a little more distinguished than his fellows, whoever wears some passing air of distinction in the world of letters, has been to France.”