CSO figures to give clearer insight into state of affairs for Irish car industry; Glanbia and Kerry Group to report 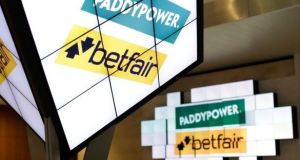 Just over two months since its corporate name change, Paddy Power Betfair – now under Flutter Entertainment – is due to report earnings on Wednesday.

If confidence in the company is in any way comparable to confidence in its rebranding, things are looking up – shareholders overwhelmingly approved the new moniker at its agm last May, by 99.8 per cent.

Chief executive Peter Jackson said he was “very thoughtful that this change of our corporate name [doesn’t mark] any significant change in our corporate strategy”.

The bookmaking group remains primed for further acquisitions within the sports betting and gaming industry, estimated to be worth €398 billion globally.

The group’s rebranding is seen as reflecting its international ambitions. Flutter is the holding company for several players – Paddy Power Betfair, Timeform, Fanduel in the US, Sportsbet in Australia and Adjarabet in Georgia.

In May, it reported a revenue rise of 17 per cent in the first quarter of its financial year. This was particularly due to “excellent” growth in Australia and the United States, although not in Britain and Ireland.

“Underlying momentum,” it said, remained good for the group during the first three months of the year, with 22 per cent growth in average daily actives and of 20 per cent revenues growth in Australia.

While results for July car sales from the Society of the Irish Motor Industry (Simi) have already set the tone for the beginning of the second half of the year, industry watchers will be keeping a keen eye too on Central Statistics Office data (CSO) on Friday.

Since the division of new car sales into two six-month periods, July sales are second only to January when those eager to upgrade traditionally flock to the forecourts.

But July is still a key weathervane for the sector. The lag in the two central reporting mechanisms for sales is down to how the data is recorded.

Owners of the latest models appearing on Irish roads must have registrations but they need not have immediate road tax. Therefore, Simi figures are based on car sales as they happen, CSO data on motor tax as it is purchased, and consequently remains the less efficient barometer.

No matter, combined, Friday’s figures will help cement the state of affairs for Ireland’s car industry as it motors into H2 2019, toward the impending Brexit deadline and the potential economic fallout that could mean a much different picture in January.