Working together, apart can be fraught with misunderstanding 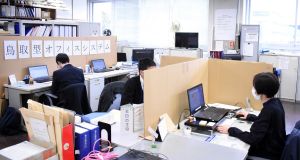 Coronavirus precautions are taken in an office in Tottori, western Japan. Photograph:STR/Getty/AFP

Four months into the biggest working from home experiment ever, the cracks are beginning to show. People are struggling with isolation, motivation and the difficulties of working alone while, corporately, there’s a growing realisation that managing large remote workforces takes a lot of effort.

Up to now the collective focus has been on the practicalities of getting working from home set up. With that pretty much done, organisations are facing into the more intractable problems, such as replicating processes that happen easily when people are together but not so easily when they’re apart.

A colleague commented recently that working from home will spell the end of the office romance, but Cupid has company. It will also make non-romantic collaborations a lot more difficult. And in a world where more rather than less collaboration is required, this is a potential lockdown casualty that few organisations can afford.

Distance collaboration comes with specific challenges because all interactions have to be explicit or things get lost in translation. Its success also depends on the type of work being undertaken.

Collaboration is easier with facts and figures than with concepts and creativity. The best ideas often come out of rapid fire brainstorming where people react almost instantaneously to what’s being said. Body language, tone of voice and small unconscious gestures all contribute to the silent feedback that drives ideas forward and that’s missing when communication is virtual.

Collaboration also works best when the people involved know each other and share a view about how things should be done. Post pandemic, however, there will be a lot more collaboration between people who have no pre-existing working relationship: one of the toughest tasks and asks during the lockdown has been slotting new employees into teams with managers and co-workers they’ve never met.

For over two decades Prof Judith Olson, Bren professor of information and computer sciences at the University of California Irvine, has been looking at how teams that are not co-located function. Her “collaborator” on the research has been her husband, psychologist Gary Olson, and they are the co-authors of Working Together Apart, which investigates the factors that differentiate successful from unsuccessful distributed collaborations. (This book also contains tips for those who are part of distributed teams and those who are managing them).

“For more than 20 years, we have been doing research, reading the literature, participating in distance work, and interviewing and observing people in all kinds of situations: big science, co-authorship of grant proposals, consolidating monthly worldwide sales figures, collaborating on developing software – we have been there. And now we know some things,” Olson says.

One of these “things” is that, while distance will always matter, it will matter less if the right technologies and social practices are in place. It will also be less of a barrier if people have already worked together, enjoy doing so and share similar working styles.

But even when these commonalities are aligned Olson says there are four things that can still derail distance collaborations: that hard to live with feeling that ‘out of sight is out of mind’; trust issues; cultural differences; and working across different time zones.

Asked by The Irish Times for her take on the impact of the pandemic on collaboration, Olson says, “The quick line is that when you work at a distance from your colleagues, you are both blind and invisible. When collocated, you get a lot of information for free just by seeing who’s around, where they are (eg, in a meeting, out of town, etc) and sometimes what they’re doing (eg, seeing their screen, whiteboard, documents out).

“When working at a distance you have to make an extra effort to make your presence visible to others and to ask them questions to see what they’re up to.”

Olson has found that that distance has a direct impact on work and affects both productivity and employee satisfaction. In addition, managers who have to supervise those working remotely face a lot of challenges.

“Ultimately, it translates to someone having to stay up in the middle of the night if they want to have a real-time conversation [across international timelines],” she says. “Even then, the relationship differs dramatically from that of a manager who regularly checks up with a team in person and immediately works with team members to address challenges when they arise.”

Olson has many example of how distance mingled with logistical issues such as different time zones and cultural mores can create very fraught working relationships. She cites video calls by one group being erroneously scheduled for national holidays or at times when some of the participants in the other group should have already finished work for the day or knocked off for their weekend break.

“We have an established rule of behaviour for when we travel,” Olson says.

“When in Rome, do as the Romans do. But where is Rome with a video call? There is no default location to which the parties accommodate. No one even thinks that they are experiencing a foreign culture and that misunderstandings might abound.”

In Olson’s view collaborative work at a distance will always be difficult even with the best tools technology can offer and everyone buying into the process. Advances such as cloud computing have moved collaboration and communication on significantly, but it seems there is no substitute for face-to-face interactions when it comes to brainstorming and troubleshooting.

“There will likely always be certain kinds of advantages to being together,” Olson says.