Pilita Clark: In the post-Covid office environment, sharing desks will be a no-no 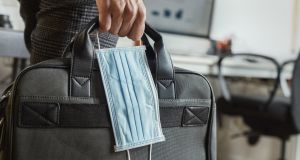 As people gingerly prepare to return to the office, the latest advice to employers is clear: ‘Workstations should be assigned to an individual and not shared.’ Photograph: iStock

Banks of roomy “superloos”. Phone apps that squawk to remind you to swab down your desk. A ban on taking the lift upstairs more than twice a day.

This is just a smattering of what experts tell me the office of the very near future might look like in the age of Covid-19.

A superloo, for avoidance of doubt, is another name for a toilet cubicle that has a basin and hand-dryer in it and, like the app and the lift rationing, I can see it makes socially-distanced sense.

But after talking last week to some of the building managers and executives who have been trying to figure out how to safely reopen large offices, I am daring to hope for something far more riveting.

Finally, blessedly, it is possible to imagine the end of one of the great scourges of modern working life: the hot desk.

Stripping people of an allotted desk and forcing them to hunt for a new place to perch each day is grim enough. It has been made far worse in recent years by companies that pretended to be doing it to boost collaboration, not to cut costs on office space.

The practice has of course been popular in spots with pricey property, such as London and Sydney. But can it survive a virus so new that scientists are still studying exactly how long it lasts on plastic versus paper, let alone a computer keyboard? Not right now in London, it seems.

The latest advice to employers from the British government is clear.

“Workstations should be assigned to an individual and not shared,” it says. If sharing must be done, it should be among “the smallest possible number of people’’.

Employers will usually need to be “avoiding use of hot desks”, it adds. If that is impossible in, say, a call centre or training area, then any shared desk or equipment should be cleaned before anyone else starts using it.

This guidance is hard to ignore. I know of at least one big bank in London with a relatively new office where large areas of floor space were specifically designed to accommodate hot-deskers.

Like a lot of other big firms, its staff went home in March as the country began to lock down. Now, as people gingerly prepare to return, shared desks are off the menu.

Hot-desking at the moment is “incredibly difficult”, one person there told me last week. Desks were being allocated.

This person thought it possible hot-desking might return but, if it does, I suspect it could be in a very different form.

That bank, like businesses across the world, has discovered to its surprise that entire divisions can operate with everyone working from home, at least for a few months.

Before March, if anyone had told me the Financial Times could print a daily newspaper under such circumstances, I doubt I would have believed it. Yet it turns out that it can.

Not every company will follow the likes of Twitter and let everyone work from home for good. Yet polls taken during the pandemic in the UK, Japan and the US suggest sizeable slabs of the workforce either like home working or are in no rush to return to the office full-time.

That makes it hard to imagine remote working ever being the outlier it was before the pandemic.

Some small London companies have already decided to ditch big offices for smaller spaces that they plan to use for meetings and other catch-ups.

If more follow, it is not impossible to imagine office costs easing, which could in turn lower the pressure for hot-desking as we know it.

In other words, people might still share a desk, but only briefly when they visit the office from their main workplace: their home.

All this might be wishful thinking. If a vaccine or drug can conquer the virus, perhaps we will rush back to our frantic old lives, hot desks and all.

In the meantime, I am taking heart from engineers such as Neil Pennell, chair of the technical affairs committee at the British Council of Offices.

“Hot-desking isn’t dead,” he said last week, “but it is perhaps in intensive care.”