Wild Geese: ‘You can’t let fear control your life or your decisions’ 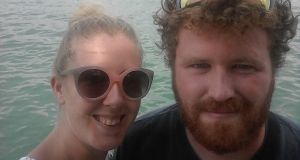 Helen Vickers and Cathal Mahon are happy living in Turkey: “We love our life here. The people are friendly, helpful and respectful,” says Cathal.

More than three months after a failed coup attempt, Turkey remains a country in a state of emergency.

But, while it could well be perceived as a dangerous and unstable place to be right now, two Irish teachers say they are determined to still call it home.

Twenty-seven-year-old Cathal Mahon and his girlfriend Helen Vickers (25) moved to Istanbul after being offered positions at the British International School at a jobs fair in England.

Both are from Kildare. Cathal is a PE and English teacher, while Helen teaches the equivalent of junior infants.

“We were away when the coup attempt happened as we’d been travelling around Europe during the summer holidays. We learned about it via social media and news reports.

“There were a few of our colleagues and friends in Istanbul at the time. They could hear the helicopters flying overhead and tried to stay inside as much as possible in the days that followed. There were reports that the government was closing private schools like ours so we were worried about our jobs, but thankfully we are still employed.”

Cathal and Helen returned just over a month after the coup and, although more police are in evidence on the streets, they say there is no sense of a changed atmosphere.

“Day to day, our lives are the same as they have been over the last two years,” says Helen.

“Just this morning I went for a beautiful run along the Bosphorus alongside many others out strolling in the sunshine, families enjoying traditional Turkish breakfast and many dedicated fishermen out for the catch of the day.”

However, she says her school is more cautious about taking classes on trips to anything perceived as a “high risk” location.

“The perception that Turkey is unsafe also potentially means that fewer ex-pats will move here, which could mean fewer students enrolling in our school. We’ll just have to wait and see.”

While the couple may not have been in the country for the attempted coup last month, they were in Istanbul on June 27th when Ataturk International Airport was hit by a suicide gun and bomb attack that left more than 40 people dead and 230 injured.

It was the ninth major attack in Turkey in the past year, five of which took place in Istanbul.

Cathal and Helen, who live about 40 kilometres away in their apartment in the Sariyer area of the city, said that attack came as “quite a shock” as an early warning system for “credible threats” operated by the British embassy had issued no alert.

However, despite the security alerts, both are happy to continue working and living in Turkey.

“Don’t get me wrong, the possibility of a security threat does play on your mind and you can’t ignore it, especially something like the bombing at Ataturk Airport that seemed to come out of the blue.”

Helen says that despite the pressure from family and friends to move back to Ireland, they won’t be scared away.

“After the first bombings happened last year, I was very skittish about being here, but now I find it easier. Day-to-day I don’t feel threatened. We love our life here. The people are friendly, helpful and respectful. We don’t speak much Turkish, but we still manage to get along with the locals.

“We’ve made our decision to stay and we both believe you have to keep going. You can’t let fear control your life or your decisions.”

As well as the loss of lives in the attempted coup and multiple bombings, there’s also been a huge loss to the economy and to local livelihoods.

The tourism and hospitality industry has been decimated throughout the country, especially in cities close to the Eastern border near Syria. Thousands of travellers from all over the world have cancelled or diverted their trips, including Irish tourists.

Cathal and Helen say they chose to move to Istanbul because they felt life would offer them more than what they had in Ireland.

“Our standard of living is much higher here, “ says Cathal.

“Helen was on minimum wage working in a creche at home, with no chance of a permanent job. Now we are both on better wages and the cost of living is a lot lower.

“We live in a nice apartment on the outskirts of a great city, which our employers pay for. Groceries and transport is a lot cheaper, so it makes life easier for us financially.

“The chance of career development is also better here and we get to travel. We’ve already been to see other parts of Turkey, like Ankara and Gallipoli on school trips, so it keeps things interesting.

“The classes are also much smaller than home, in fact one of my classes only has three pupils in it, so it takes the pressure off.

“We also feel our jobs are more secure here, which was something we never felt at home.”

“When we do decide to move on to explore another country and culture, it will be bittersweet to leave this wonderful city and the many great people we have befriended here,” says Helen.