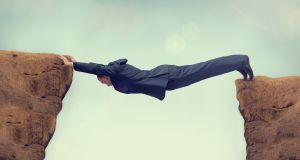 “Candidates care about the culture of an organisation, the development opportunities and if they will be offered mentoring and flexible working arrangements.” Photograph: iStock

There’s a sense of deja vu about the current jobs market and not in a good way. Skills shortages are driving wages and benefit packages up again – by 3.6 per cent a year, according to the latest EY Economic Eye report. This may be good news if you’re a job seeker but, as compensation expectations rise, people quickly forget that spiralling wage costs contributed to the demise of hundreds of businesses and thousands of jobs in the economic crash a decade ago.

What’s adding a sting this time around is that we can no longer rely on eastern Europe to plug our employment gaps. Ageing and declining populations there, coupled with years of emigration to the West, means the region is facing skills shortages of its own.

As a result, national minimum wage rates are rising sharply there. In the first quarter, labour costs in Hungary were 10 per cent higher than last year. The figure was 9 per cent for the Czech Republic, 8.5 per cent for Slovakia and 8 per cent for Poland.

Better pay makes uprooting less attractive and there are reports of desperate employers offering to double salaries to get staff. Eastern Europe is now looking to attract workers from the Ukraine, Vietnam and Russia to solve its labour problems.

The latest Hays Global Skills Index, which measures the ability of companies in 33 countries to access skilled workers has just been published. A score above 5.0 indicates a labour market that is tighter than normal. The good news is that, while pressure on labour markets is increasing, the overall year on year change is small at 5.5 (out of 10) compared with 5.4 in 2017.

The index gives Ireland an overall score of 5.8 (up from 5.4 in 2017) and notes that wage rises in high-skilled occupations are significantly outpacing those in less skilled sectors.

“Staff shortages are an issue across many sectors, and companies are increasingly looking overseas to fill vacancies,” says Mike McDonagh, managing director of Hays Ireland. “Net inward migration is at its highest since 2008 but the labour market participation rate is below its pre-crisis peak, suggesting potential for further workforce growth.

“The skills in short supply include newly qualified accountants, engineers of all sorts, data scientists, cyber security analysts, IT specialists, pharma, legal and those who can fill health and safety vacancies.”

Hays should have a good sense of what’s happening in the labour market. It places about 300,000 people in new roles every year in more than 30 countries across 20 professional disciplines. According to chief executive Alistair Cox, there are two big labour issues that need to be tackled urgently. The first is the growing mismatch between the skills workers have and what employers need. The second is stalling productivity.

“Almost half of the countries included in the index showed a rise in the rate of unfulfilled vacancies – a key indicator of talent mismatches,” he says. “The second factor revealed in the index, and one that has continued to trouble economists for the best part of a decade, is the ‘global productivity puzzle’. Labour productivity levels across the globe, particularly in Europe, the Middle East and the Americas, have essentially flatlined since the global financial crisis.”

Stagnation in productivity may be a longer-term trend, he says, and “the result of macroeconomic forces such as an ageing population, a downturn in global trade and reduced investment in education and training”.

He says the mismatch between talent and opportunity is only going to get worse if companies don’t move with the times, especially when it comes to embracing technologies with the power to change people’s jobs, such as AI.

McDonagh is on the same hymn sheet as his boss. “The Irish labour force needs to be prepared for technological disruption. Companies should be adopting a policy of ongoing training to make Ireland more agile when it comes to workforce utilisation,” he says.

He sees the introduction of apprenticeships as a positive step towards broadening the skills base and says companies in search of employees need to get serious about diversity and smarter about their job ads.

“There are clear opportunities to plug skills gaps by embracing a more diverse workforce and including more people with disabilities, homemakers who could rejoin the labour force if working patterns were more flexible, and older people,” he says.

“I know of a company that recruited someone 10 years out of the workforce because they were caring for a relative. The company had a choice between them and someone with current experience. The chose the first person because they were a better cultural fit and demonstrated an ability to quickly pick up the skills needed for the job. Out-of-the-box thinking goes a long way in a tight labour market.”

When it comes to writing job ads, McDonagh says it’s time to move to a more holistic approach that appeals to the sensibilities of younger workers.

“Companies have to make it clear why someone should trade company A for company B – what the move will do for them,” he says. “People will still move for money, but it’s not the only reason. Candidates care about the culture of an organisation, the development opportunities and if they will be offered mentoring and flexible working arrangements.”