Regulations may result in ‘reputational damage’ and equal pay claims 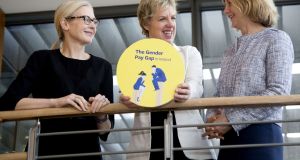 Organisations are being urged to do private “dry runs” on the calculation of their gender pay gap before they are required by law to reveal the data.

The Gender Pay Gap Information Bill, which is expected to come before the Oireachtas by the end of the year, will oblige larger employers to publish the difference in the average hourly pay of men and women in their organisation.

Similar legislation is now in force in the UK, where companies reported their first set of annual gender pay gap figures last spring, prompting “naming and shaming” media reports on companies with gaps that were worse than the national average or the average for their sector.

“A key concern for organisations is the scope for reputational damage from a high gender pay gap,” said McCann FitzGerald partner Mary Brassil, addressing a seminar in Dublin on Wednesday.

“It is really important to establish that you have the resources within your organisation to collate the gender pay data, including the software you will need.”

Employers should also devise “appropriate, credible and achievable” strategies for how they can reduce any gender pay gaps in their organisations, she said.

Tamsin Sridhara, senior director for Willis Towers Watson’s British HR consulting team, said some clients had left it to “the eleventh hour” to come up with a plan for how they might promote more women to senior roles, which was “not the best approach”.

Reporting regulations would not in themselves close the gender pay gap, but in her experience the UK rules had already made “the biggest impact in the smallest amount of time” on the problem.

“From a social policy perspective, these regulations are genius,” Ms Sridhara said.

The gender pay gap and the concept of equal pay for equal work are two different things. The presence of a gender pay gap does not necessarily mean women are not being paid the same for the same work as a male colleague, or unequal pay, which has been illegal in this State since 1975.

“However, there is no doubt that the introduction of gender pay gap reporting in Ireland will stimulate equal pay claims,” said Ms Brassil. Employers should be prepared for this, she warned.

Discrimination and bias are one of the possible causes of a gender pay gap. Other, often interrelated factors, include educational and occupational segregation, the under-representation of women in senior management roles, the pooling of women in lower paid roles, more women than men working part-time and more women than men taking on caring responsibilities.

Gender pay gap figures express women’s earnings as a percentage of men’s earnings. The Irish gap in 13.9 per cent, according to the 2014 figures, which is below the European average of more than 16 per cent.

The Government published the general scheme of the Bill in June.

The form, manner and frequency of reporting and how the data will be published has not yet been clarified, but the regulations will initially apply to companies with more than 250 employees. They will later be extended to those with 150 or more employees and then those with 50 or more.

As well as differences in the mean and median hourly pay for men and women, the regulations will also require companies to publish data on bonus pay, part-time workers’ pay and contract workers’ pay.

Labour senator Ivana Bacik had earlier introduced a Private Members’ Bill similar to the Government’s proposal, but it had also included a possible fine of up to €5,000 for non-compliance.

“There needs to be some sanction, albeit at the end of the line,” Ms Bacik said. “This is where the Government scheme isn’t clear.”

The senator said she hoped the Government bill, to which she plans to submit amendments, would become law next spring, although it was possible that this timetable could be derailed by a general election.

There is then likely to be a commencement period of at least a year before organisations must report their data.