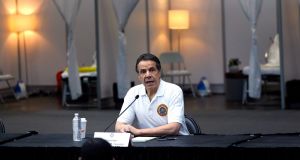 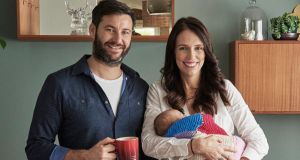 New Zealand PM Jacinda Ardern with her family in their home in Auckland. She is among the leaders who have spoken clearly and honestly about the coronavirus crisis. Photograph: Derek Henderson/Jacinda Ardern via AP

The other night, New Zealand’s prime minister, Jacinda Ardern, put her daughter to bed and sat on the couch to send a video message to her nation as it entered a coronavirus shutdown.

“Thought I would jump online quickly and just check in with everyone really, as we all prepare to hunker down for a few weeks,” she said, apologising for wearing what appeared to be a tracksuit.

“Excuse the casual attire, it can be a messy business putting toddlers to bed.”

In that moment, as she explained that New Zealand’s relatively small number of cases was expected to rise sharply and people should stay at home, she rocketed into the ranks of a laudable – if sometimes unprintable – group of men and women.

Some are in the police force. Others are obscure mayors. Some, like Ardern, lead countries with a population half that of London.

Each has shown the no-frills virtues of speaking clearly and honestly in a crisis. Put another way, the coronavirus age is no time for bulls**t.

As it happens, the club of plain speakers includes a number of Antipodeans besides Ardern.

Last week, the police chief commissioner in Australia’s second most populous state of Victoria was asked about reports that a big bank had needlessly evacuated people from its Melbourne office when a worker falsely claimed to have tested positive for the virus.

Could the employee face any charges, a radio host asked commissioner Graham Ashton. “Oh, I don’t think so,” drawled Ashton, “It’s not against the law to be a d**khead.”

This admirably direct approach was also on display three weeks earlier in Sydney, in those heady days when we could easily laugh at panic-buying shoppers.

When a brawl broke out in one supermarket’s aisles over toilet paper, New South Wales police acting inspector Andrew New said there was no need for people to behave like that.

“It isn’t the Thunderdome, it isn’t Mad Max, we don’t need to do that.”

Andrew Cuomo, the governor of the state of New York, has torn into people ignoring orders to stop gathering together.

The leaders in the pack so far, however, are that group of angry mayors in Italy, whose furious rants at people flouting quarantine rules by wandering about outside flooded inboxes worldwide last week.

“Where the f- are you going?” raged one. “You need to stay at home! People are dying, don’t you get it?”

Another was apoplectic about the people haplessly helping the virus to spread by inviting hairdressers home for a do.

“Who the hell is going to see you?” he yelled. “Do you understand that the coffin will be closed?”

Too much has been written already about one famously frank leader’s performance during this crisis. Donald Trump has indeed been direct. But his confusing edicts and misstatements of facts disqualify him from membership of the honourable club of communicators.

Not so Andrew Cuomo, the governor of the state of New York.

Like the mayors in Italy, where Cuomo’s grandparents came from, the governor has torn into people ignoring orders to stop gathering together in public parks. “It’s arrogant. It’s self-destructive,” he told them last week. “And it has to stop now. This is not a joke and I am not kidding.”

There is another reason Cuomo’s stature has risen during this pandemic.

He has been decisive, informative and willing to accept responsibility for his decisions.

“If someone wants to blame someone, or complain about someone, blame me,” he said of his order for non-essential workers to stay at home.

Finally, unlike Trump and too many other leaders, he has told the truth about one of the most unnerving aspects of this pandemic and the cascading financial, economic and social disasters it has unleashed.

We have no idea when it will be over.

Those are difficult words to say and hear. But in the days and weeks ahead, the leaders who continue to utter them will be the ones who deserve our attention.

1 Michael Smurfit: ‘I asked Trump to invite me to the White House for my 80th birthday’
2 Small businesses are cannon fodder in zealous anti-virus experiment
3 Household savings soar as consumers stop spending
4 ‘I’m so lucky to be in the Caribbean – a million miles from Derry Girls’
5 Irish business of Carluccio’s restaurants to be wound up
6 Tax and the Pandemic Unemployment Payment: Your questions answered
7 ‘It’s safe to fly’, EU aviation safety boss says
8 ‘Never mind GDP; the most fundamental job of any leader is to keep his people alive’
9 ‘The recovery needs to be a full-scale economic renewal’
10 Ireland stands to benefit in a big way from investing in public transport
Real news has value SUBSCRIBE