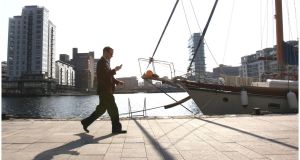 Boom times are back? Some Irish employers are reporting employee turnover levels of up to 30 per cent, causing “significant issues” for the business.

Most Irish business will face a challenge retaining their key staff in 2018, a new survey has found.

According to a survey conducted by Performance Reward Consulting of human resource specialists in 76 organisations across Ireland, more than a quarter expect that they will lose a greater number of employees in 2018. This comes against a jump in employee turnover among 36 per cent of respondents in 2017.

Patrick Robertson, managing director of Performance Reward Consulting said: “As the economy on both sides of the border has improved, Irish employers now face a real challenge to retain staff, particularly their high performing and high potential employees who are often the first to move.”

Companies operating in Northern Ireland reported a higher turnover rate (13.1%) than those in the Republic (8.3%). However, some Irish employers were reporting employee turnover levels of up to 30 per cent, causing “significant issues” for the business.

Responding to this challenge, the survey found that almost half (46%) of responding organisations are taking steps to increase their employee retention for 2018, such as implementing new pay structures and career paths, employee recognition schemes and focusing on their incentives and benefits to try to retain staff.

Pay rises are also part of the proposition, with just under 94 per cent of employers on both sides of the border planning a pay increase. While the average 2018 pay increases within the survey are forecast at 2.5 per cent in the Republic of Ireland and 3 per cent in Northern Ireland, some employers are reporting pay increases above 8 per cent for specific employees or employee groups.