Survey indicates only 10% of employers value postgraduate qualification above experience 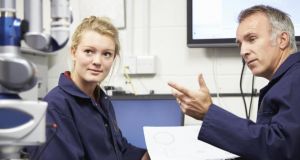 The average pay for student internships is on the rise but employers are increasingly using such work experience as a replacement for traditional entry-level jobs, a new survey suggests.

The gradireland recruitment survey for 2014/15 shows that 17 per cent of employers paid students over €1,800 a month for work experience or internships, up from 9 per cent three years ago.

However, the report found there was little movement in graduate wages despite increased economic activity.

The study also found the value of a postgraduate qualification is diminishing in the eyes of employers compared to work experience.

While 53 per cent of employers saw the two as of equal value, 29 per cent said they valued work experience more (up from 23 per cent last year).

Only 10 per cent said they valued a postgraduate qualification more (down from 17 per cent last year).

“Investment in postgraduate study should be considered carefully in the light of intended career paths,” the report said. It also cites an increasing gap in expectations between employers and graduates around pay and conditions. Some 35.2 per cent of companies said graduates had “unrealistic expectations” compared to 16.3 per cent last year.

Ruairi Kavanagh of gradireland, said there had been “unscrupulous employers” who used internships for cheap labour but this was now less evident. Rather, “the internship has replaced the first job”.

An indicator of this was the fact that one IT company which participated in the survey had recruited 80 per cent of its graduate employees through internships.

“It’s no longer a case of whether it’s a good thing to have work experience. It’s now something you pretty much have to have; it does not necessarily have to relate to the sector,” said Mr Kavanagh.

Over 100 leading graduate employers were surveyed for the Graduate Salary & Graduate Recruitment Trends Survey, now in its ninth year.

While the number of employers offering work experience and internships was up from 81.1 per to 85.7 per cent, fewer saw value in the JobBridge national internship scheme.

The majority of companies run their work experience programmes for students still in university.

There was also “a sizeable leap” in the number of companies predicting challenges in filling their graduate recruitment positions (up from one third of respondents to one half). Asked about skills gaps in graduates, poor communications skills and lack of confidence were cited as leading problems, followed by lack of analytical skills.

Lack of fluency in a foreign language was identified by 43 per cent of employers surveyed as the number one “hard skill” shortfall; this was up markedly from 26 per cent last year.

1 Irish people like nothing more than being bribed with their own money
2 Election adds to headaches for AIB boss Colin Hunt
3 Being in Nama regarded as stigma in UK, O’Flynn tells court
4 Climate apathy in Northern Ireland could impact on the Republic
5 Construction body calls for loan scheme to help first-time buyers
6 Labour Court expected to rule on Paddy Power workers’ claim
7 The Irish economy is thriving but if you’re not feeling it – here’s why
8 Fast-growing frozen food group has a strong appetite for success
9 GoMo is being investigated by advertising authority
10 Barclays to cut 100 senior roles as lender seeks to rein in costs
Real news has value SUBSCRIBE