Northern Ireland tourism is more than a ‘Game of Thrones’

TV show among elements that boosted visitor numbers to record high of 2.3m in 2015 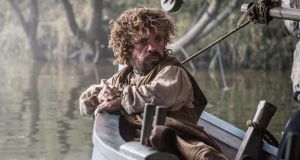 Actor Peter Dinklage in a scene from Game of Thrones: the series which is filmed in Northern Ireland helped boost visitor numbers last year. Photograph: Helen Sloan/HBO via AP

Northern Ireland has never been more popular for visitors – at least according to the latest official statistics which show a record 2.3 million tourists visited and stayed in the North last year.

Some came for the Irish Open at Royal County Down, others for the first stage of the 2015 Tall Ships Race. Thousands of fans of television show Game of Thrones (GoT) also flocked here to see the real locations of – where among other things – good battled evil.

“External” tourists spent a welcoming £541 million (€711 million) during their visits and, combined with domestic trips taken by locals last year, the total spend from overnight visits was worth £760 million to the local economy.

It is short of the £800 million tourism revenue target that the North’s political leaders had set for 2015 but total visitor numbers for last year – which combines external and domestic tourists – hit 4.5 million, which was comfortably ahead of target.

Tourist chiefs are primarily blaming the “strength of the pound” as one reason why tourism revenue is not as high as they had hoped it would be.

This might also help explain that while visiting Northern Ireland is becoming an increasingly attractive option for some – last year the number of visitors from Britain grew by 121,000 to 1.3 million – it appears the reverse is true for cross-Border tourism.

The Northern Ireland Statistics & Research Agency said the number of people visiting the North from the Republic fell by 69,000 in 2015 and the number of domestic overnight trips taken by locals also slumped by 104,000.

It is estimated that more than 58,000 people in the North are employed in tourism-related industries and the new Northern Ireland Economy Minister, Simon Hamilton, says it has become a “key economic driver”.

“The industry represents 5.2 per cent of our gross domestic product and supports 5.4 per cent of jobs in the total workforce, providing opportunities across all skill levels and all local council areas,” Hamilton says.

He plans to introduce a new tourism strategy for next year which he claims will “drive growth” across the sector and will “build an internationally competitive and inspiring destination of which we are all proud”.

If the Minister needs inspiration along the way, he could do no better than pop into one of Marcus Roulston and Ian Orr’s growing stable of award-winning premises.

The duo behind the Browns Restaurant Group and Ardtara Country House Hotel operate, according to the latest Irish Restaurant Awards, the best restaurant in Ulster.

The group, which stretches from Derry to Letterkenny and Maghera and which has also just been awarded the 2016 AA Guest Accommodation of the Year award for Northern Ireland, is quickly becoming a favourite among celebrities and foodies when visiting the North.

Roulston says it is not easy to build a tourist or hospitality-focused business and make it a success.

“It takes a lot of hard work. You have to be resilient and you have to keep investing in your restaurant, hotel and in your people,” he says.

“We’ve won a lot of awards but our focus is on looking ahead. We are constantly looking for flaws and looking for ways that we can improve everything. We want people to come back time and time again and we want to give them a reason to come back and that is very important if you want to put Northern Ireland on the map for tourism: you have got to keep making the experience even better than it was the last time.”

If Hamilton does get a chance to pop into one of the Brown group’s establishments the first topic of conversation, according to Roulston, will be local VAT rates.

“One thing that isn’t helping anyone in Northern Ireland is the VAT rate of 20 per cent – compare this to the VAT rate of 9 per cent for the hospitality sector in the south and it is just huge – we see the difference it makes at our Browns on the Green in Letterkenny and if we had the same rate in the North we could reinvest more and create more jobs,” Roulston says.

1 UK tips into deepest recession on record after 20% contraction
2 General Motors loses rising star after shock move to Stripe
3 UK criticised for ‘unforced errors’ on post-Brexit trade deals
4 Moving in and out of lockdown is a recipe for economic disaster
5 Stripe lures Dhivya Suryadevara from General Motors to be CFO
6 European markets rise despite UK recession
7 Intel welcomes green light for new $4bn plant in Leixlip
8 Sorry, Domhnall Gleeson, I don’t want to chat to you anymore
9 CityLink and Allianz big losers when it comes to customer experience
10 Microsoft worked with Chinese military university on AI
Real news has value SUBSCRIBE