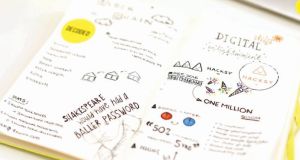 Physical diaries and notebooks, particularly the upmarket, expensive kind, are more than holding their own against the digital onslaught of Google docs and online calendars

Milling around the shop at London’s Design Museum, my eyes fell on the perfect companion –a hardback paper diary designed by Els & Nel. With a black and white inkblot-design cover and a handy pullout year planner, it was just what I was looking for. I bought it immediately.

Some might think this an unusual purchase for a millennial with an iPhone and an iPad who flits between WhatsApp, Instagram and Snapchat, and who works as a digital journalist. But it is not. I am a habitual user of paper diaries and notebooks for work and personal use – and I am not alone.

As we enter a new year, with calendar space to fill with meetings, projects and appointments, many are reluctant to give up their paper companions. Physical diaries and notebooks, particularly the upmarket, expensive kind, are more than holding their own against the digital onslaught of Google docs and online calendars. Leading luxury suppliers report strong demand among millennials and consumers of all ages. In 2017, we still want to use paper and a pen.

Why should this be? Maria Sebregondi, co-founder of Moleskine, the luxury notebook company founded in 1997 and based in Milan, says that in a digital world, paper is still valued by young business professionals. “We always see an increase in annual sales of notebooks and paper planners despite other digital opportunities,” she says.

Moleskine’s revenues were €128 million in 2015, up from €53 million five years earlier. Paper products accounted for nearly 90 per cent of those sales (the company also makes leather goods). In the first nine months of 2016, sales followed a similar growth pattern, with net revenues of €95.89 million.

The company’s millennial customers are educated, digitally savvy “and the most keen to rediscover paper”, says Ms Sebregondi.

Smythson, a privately owned luxury British stationer, claims a similar experience – though it could not provide sales figures.

Its products are not cheap, with many of its diaries and notebooks costing upwards of £200, but it says craftsmanship and provenance – the company was established in 1887 – have wide appeal. Its best-selling item is a lambskin Soho diary, which costs £155.

Some diaries are designed to serve a specific industry. The fashion diary, for example, which was launched 20 years ago, offers insider tips on the fashion capitals, London, New York, Paris and Milan.

Neal Whittington, who owns Present and Correct, a boutique stationer in Islington, north London, says sales of diaries have increased by about 18 to 20 per cent year on year since he started stocking them in 2009. “And we always sell out,” he says. The shop opened in 2012 after the business started online.

“Our diaries go to predominantly an early 20s to early 40s age group,” he says.

Mr Whittington points out that being digital does not mean rejecting physical objects. “In the age of [digital] savviness people are much more aesthetically aware,” he says, “and with that comes the desire to have attractive things.”

Sales may be high for luxury diaries, but the more functional end of the stationery market appears less successful.

US office supply chain Staples, for example, has sold its UK retail arm, which posted a £5 million loss in the year to January 2015, to restructuring specialist Hilco Capital for a nominal fee and is closing stores in North America.

Can the appeal of luxury paper products endure? “Awareness of stationery is greater in this country than ever before,” says Mr Whittington. “And if we get as obsessed about it as Japan or Korea then there is plenty more room for growth.”