What did you do at the work Christmas party? 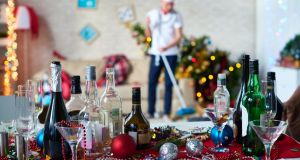 The SFA said complaints from employees after Christmas parties are not uncommon. Photograph: iStock

Ever wake up in a cold sweat, desperately trying to remember what you might have said or done at your Christmas party?

Whether it’s airing some ill-advised home truths, telling your boss how to best run the company or making inappropriate advances towards a colleague, not many such events end without some indiscretions occurring.

Perhaps that’s why the Small Firms Association (SFA) has issued a warning as the party season gets into full swing, advising employers that it’s all fun and games until somebody loses a court case.

“An employer can be held liable for anything done by the employee in the course of employment,” said SFA director Patricia Callan on Thursday.

“In this regard, a work-related event is seen as an extension of the workplace and it is important that employers and employees are aware of their obligations from the outset.”

It may all seem a little bah-humbug but, says the association, complaints from employees regarding grievances, including harassment and sexual harassment, are not uncommon.

“We all understand the benefits of a social outing on team building. However, these social events also have the potential to provide a context for inappropriate behaviour that could have serious repercussions,” Ms Callan said.

The SFA advises employers to control alcohol intake by providing drinks vouchers instead of having a free bar and to ensure food is provided.

And even before everyone heads for the party, employees should be reminded about existing policies, particularly those governing bullying, harassment and the use of social media, the SFA said.

“It is advised that employers take action on complaints without delay and follow the company procedures in the normal way,” Ms Callan said.

“Previous case law has shown that the Equality Tribunal was extremely critical of complaints not being followed up by a company as the issue arose at the Christmas party.

“It is also important to bear in mind that, if a manager witnessed an incident or altercation, they should be excluded from conducting the formal investigation into the matter in line with fair procedures.”

1 How long can Government afford to keep State pension age at 66?
2 Guinness brings out a non-alcoholic version of the black stuff
3 Farm lobby seeks EU ban on vegan ‘burger’ and veggie ‘sausage’
4 Sherry FitzGerald aims for bigger share of broker market
5 How much will a Covid-19 vaccine cost?
6 Donohoe said delay to local property tax reform was ‘untenable’ before deferring it
7 Ireland v the rest of the world: Do we pay too much tax?
8 British Airways jumbo saved from scrap heap by film deal
9 How on earth do we the calculate the cost of Level 5 for the Irish economy?
10 Gadgets to help keep your home safer this winter
Real news has value SUBSCRIBE