How to safeguard labour force against artificial intelligence 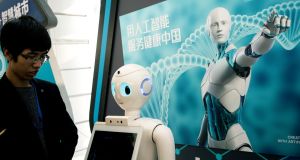 An iFlyTek robot that uses artificial intelligence, in Beijing. The answer to the question of whether AI will help or hurt workers depends on your timeframe and your socio-economic class. Photograph: Giulia Marchi/The New York Times

Two of the most polarising words in the English language at the moment (aside from “Donald Trump”) must be “artificial intelligence”. Last week, Big Tech ramped up a campaign intended to convince people that robots will not take their jobs.

Executives from Intel and Tesla testified in a US House subcommittee meeting on the challenges of AI, dismissing many public concerns. Others including Google chief economist Hal Varian gave interviews pushing the idea that AI is the labour solution to shrinking birth rates in rich countries.

Yet, this charm offensive coincided with a series of events that cast a different light on the tech industry. The most notable being the revelations, following the justice department indictment of 13 Russians and three companies, of the extent to which Facebook and other tech platforms were used to undermine the 2016 US presidential elections. That came after a 60-year-old taxi driver in New York shot himself in front of City Hall, in despair over the structural shifts in his industry. His suicide prompted New York mayor Bill de Blasio to revive a failed effort to regulate Uber.

Then it was the turn of tech titan-turned-philanthropist Bill Gates, who warned Big Tech was resisting government oversight. Unilever has threatened to withdraw its advertising from companies such as Google and Facebook that “create division in society”. And Andrew Yang, the founder of a non-profit organisation that links college graduates to start-up employment, launched a 2020 White House bid on an anti-AI platform. He will not be successful, but the issue – the human cost of AI, big data and automation – will be a major topic in both the 2018 and 2020 US elections.

The answer to the question of whether AI will help or hurt workers depends on your timeframe and your socio-economic class. Technology is always a net job creator over the long run, but, as Keynes put it, in the long run we are all dead.

The US should take a page out of the post financial crisis German playbook, in which large scale lay-offs were avoided

In the next five years or so, as these technologies make their way into every industry, they will benefit those at the very top with the skills and education to leverage the productivity advantages that AI affords. Medical specialists, for example, could dramatically increase their income by using AI’s predictive analytics to better diagnose and treat patients. But workers doing highly repetitive tasks that can easily be done by machines will not fare so well. AI looks very likely to increase the winne- takes-all trend in global labour markets.

This has massive consequences. A McKinsey Global Institute report out on Wednesday shows that, while digitalisation has the potential to boost productivity and growth, it may also hold back demand if it compresses labour’s share of income and increases inequality. An earlier McKinsey survey of global executives found that the majority believed they would need to retrain or replace more than a quarter of their workforce by 2023 to digitise their businesses.

At a recent conference, I heard chief executives from large US multinationals discussing ways in which technology would be able to replace 30-40 per cent of the jobs in their companies over the next few years – and fretting about the political impact of lay-offs on that scale.

I would like to propose a radical solution. Do not lay them off. I am not asking corporate America to keep workers on as charity. I am suggesting that the public and private sector come together in what could be a kind of digital New Deal.

For as many jobs as will be replaced by automation, there are other areas – customer service, data analysis, and so on – that desperately need talent. Companies that pledge to retain workers and retrain them for new jobs, should be offered tax incentives to do so. The value of these would be much easier to track than those in the current tax reform Bill, which has already resulted in mainly financial engineering rather than real on-the-ground investment.

The US should take a page out of the post financial crisis German playbook, in which large scale lay-offs were avoided as both the public and private sector found ways to continue to use labour even as demand dipped. Companies were given government subsidies to keep workers on, and spent the cash on factory upgrades, technical improvements, and training costs, all of which helped German companies grab market share from US rivals in places such as China when growth returned.

Corporations also contributed spare workers to public schemes that benefit the larger economy. There are plenty such projects in the US that workers could be deployed on now – helping expand rural broadband, for example. The largest companies might even pledge money and excess labour for such a project, which would ultimately supply them with more customers by creating demand in low growth areas.

In a nod to the number of workers that face being downsized you could call it the 25 per cent solution. A way for companies and government to turn a potential employment disaster into an opportunity by using this disruption to train a 21st-century workforce and build the public infrastructure to support it. The alternatives, slower growth and more polarised politics, are not pretty.

1 Michael Smurfit: ‘I asked Trump to invite me to the White House for my 80th birthday’
2 Ryanair expects air fares to fall when flights take off again
3 Small businesses are cannon fodder in zealous anti-virus experiment
4 ‘I’m so lucky to be in the Caribbean – a million miles from Derry Girls’
5 Irish business of Carluccio’s restaurants to be wound up
6 ‘Never mind GDP; the most fundamental job of any leader is to keep his people alive’
7 Tax and the Pandemic Unemployment Payment: Your questions answered
8 Charlie Chawke plans 290 apartments and hotel on Goat pub site
9 ‘The recovery needs to be a full-scale economic renewal’
10 Household savings soar as consumers stop spending
Real news has value SUBSCRIBE