In this ‘always-on’ world, time management is crucial 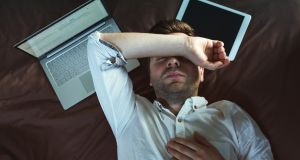 It is often the simplest things that make technology work better for you.

In this “always-on” digital world, some people have a closer relationship with their mobile phones than they do with members of their own family.

Family dysfunction aside, however, time management is now more challenging than ever with text messages, mail, news and social media feeds coming at us 24/7.

The thought police tell us not to respond to work emails after 6pm, to switch off our phones so the boss can’t get hold of us and not to look at work-related documents on your laptop at night while surfing the web.

If you’re in a 9-5 job with no work-related responsibilities, that advice might fly. For most people, the reality is that they need to keep on top of things and quiet times late at night or first thing in the morning may be their best opportunity to send and answer mails and messages.

Receiving out of hours communications shouldn’t be a problem unless you feel compelled to respond to the detriment of your sleep or personal life or you get ticked off for not being in sync with someone else’s time clock.

If this is constantly happening, it is important to make it clear that you operate in a different time zone and will react within it – unless of course, you’re role specifically requires you to tune in to other time zones.

Technology has developed so fast that there has been little opportunity to press the pause button. We’ve passively accepted “always on” and this has led to the development of that painful modern phenomenon – fear of not responding.

Neil Massa, co-founder of the UK-based training company, Smarter Not Harder, says it has become a real emotional challenge not to react instantly to digital messaging. “People struggle to leave it alone and are constantly being distracted and disrupted,” he says.

Massa estimates, conservatively, that his company can save employees three days a month by bringing them up to speed with the latest productivity tips and training them to be more disciplined with technology. “The game has changed and new rules apply, but people are stuck in old ways of thinking – a bit like coming to work on a horse,” he says.

“Over 90 per cent of the UK workforce have never read a book on time management and, of those that have, 80 per cent haven’t read one in the last three years,” he adds. “The point is this: the chances of a young person entering the world of work for the first time and being surrounded by people who are role models for productivity and time management in a digital age are slim to zero.”

In response, Massa’s company has begun running time-management courses specifically for young people entering the workplace for the first time.

However, in Massa’s experience, people either don’t know about them or don’t do them.

As examples, he cites those who don’t add their phone number to text messages to make it easier for someone to return their call. He advocates doing the same when sending diary dates so you have the contact number within the notification.

He also urges people to master the time-saving functions offered by systems such as Outlook, which centralises webmail, diary, tasks and contacts. “Used properly, it’s a godsend,” he says.

The immediacy of texts and emails has upped the ante on response times. But before you answer, look at the timeline. Does it have to be done right now? If possible push deadlines out and say when you will have something by rather than dropping everything to do it there and then.

Cultivating time-saving habits are key to managing time effectively. For example, standardise filing and bookmarking across your devices so you can access things quickly. It may take time now to learn how to use an app or master a new skill, but if it’s going to save you hours in the future it’s a worthwhile investment.

Finally, cut and paste has a lot to answer for. Where previously people had to distil their thoughts, nowadays they dump whole documents leaving you to search for key information.

Digitally speaking, this is poor etiquette and they should be called on it. However, you can beat them at their own game by becoming adept at scanning documents or learning how to speed-read.

“Email is s still the most widely used (and abused!) medium in the workplace. If you don’t know how to manage it, it can ruin or, worse still, wreck your work life,” Neil Massa says.

He deals with his email twice a day for periods of up to half an hour and completely empties his inbox each time. By batching he gets through mail faster and is not being constantly distracted.

During “processing” all mails are treated under five headings:

– Complete (ie answer and provide what’s asked for but only if it can be done in two minutes. Any longer will knock your day out of shape).

By the end of a session, Massa has nothing left in his inbox that still requires attention.