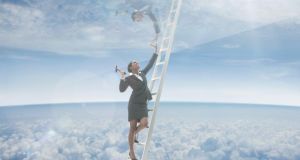 Among chief executives of firms on the S&P 1500 for each woman, there are four men named John, Robert, William or James. Photograph: Thinkstock

Fewer large companies are run by women than by men named John, a sure indicator that the glass ceiling remains firmly in place in corporate America.

Among chief executives of firms on the S&P 1500, an index that covers 90 per cent of market capitalisation in the US, for each woman, there are four men named John, Robert, William or James. The New York Times is calling this ratio the Glass Ceiling Index, and an index value above one means that Jims, Bobs, Jacks and Bills – combined – outnumber the total number of women, including every women’s name, from Abby to Zara. Based on this, chief executive officers of large firms are deemed to have an index score of 4.0.

The Glass Ceiling Index is inspired by a recent Ernst & Young report, which computed analogous numbers for board directors. That report yielded an index score of 1.03 for directors, meaning that for every one woman, there were 1.03 Jameses, Roberts, Johns and Williams – combined – serving on the boards of S&P 1500 companies.

Even as this ratio falls short of the score among chief executives, it remains astonishingly high. It also understates the impermeability of the glass ceiling. After all, most companies understand that an all-male board looks bad, and so most of them appoint at least one woman, although only a minority bother to appoint more than one.

Far fewer of these large firms – currently 1 in 25 – are run by a woman serving as chief executive.

Turning to Congress, there is a partisan divide in the Glass Ceiling Index. On the Republican side of the Senate, there are as many men named John as there are women. Add in the senator Roberts, senator Jameses and senator Williams, and they outnumber their female colleagues by a ratio of 2.17 to 1. The score in the House is slightly less unbalanced, but there are still 1.36 Jims-Bobs-Jacks-Bills for every woman.

By contrast, on the Democratic side, women outnumber the men with these particular names by quite a margin; the Glass Ceiling Index suggests a ratio of 0.3 to 1 in both the House and the Senate.

Likewise, within the executive branch, US president Barack Obama has appointed secretary (John) Kerry and (Robert) McDonald, but they’re still outnumbered by six women, yielding an index score of 0.33. (treasury secretary Jack Lew is a Jacob, not a John, and so not relevant to this index.)

The other side of our ratio is the share of women, who were 51.2 per cent of the population. Putting these numbers together, the ratio of Jims-Bobs-Jacks-Bills to women is 0.12 to 1.

Other institutions are clearly in transition. For instance, chief justice John Roberts is the only John on the Supreme Court, and he is outnumbered by three women, which yields a score of 0.33. But this is a more balanced court than it has historically been, and before Justice Elena Kagan took over from Justice John Paul Stevens, there were as many Justice Johns as women.

This new approach to quantifying the glass ceiling can be applied to other fields, such as academic economics. A quick count of full professors in the “top six” economics departments – typically thought to include Chicago, Harvard, MIT, Princeton, Stanford and Yale – reveals 1.12 professors James, Robert, John or William for each female economics professor, suggesting that we are still a substantial distance from gender parity.

Indeed, this is a setting where the index probably understates the problem, as economics faculty members are an internationally diverse group, and the index is unmoved by Jaimes, Robertos, Juans or Willems.

The Glass Ceiling Index is an enjoyable but quite imperfect way of measuring the permeability of the glass ceiling. (Especially because in a few decades, the millennial Jacobs, Tylers and Zacharys will outnumber baby boomer Bills and Bobs.) But it does point to an important truth – that in many important decision-making areas of American life, women remain vastly outnumbered. – Copyright New York Times 2015

Pilita Clark: I have never been entirely on board with working from home