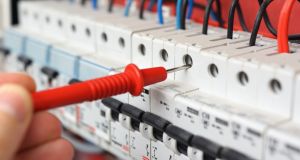 Connect officials would meet members in each workplace over the coming weeks to discuss the ruling. Photograph: iStock

The Connect trade union is to ballot more than 20,000 members in the electrical contracting, mechanical engineering and construction sectors for a mandate for industrial action.

It said this would take place in the event of any employer cutting the pay or conditions of its members in these sectors on foot of a High Court ruling earlier this week which struck down as unconstitutional the system of sectoral employment orders which set out minimum terms to apply in particular areas.

The executive committee of the Connect union, which has members in all three sectors affected, met on Thursday to consider the High Court ruling.

Connect general secretary Paddy Kavanagh said the union would be writing to all employers warning of “war” in the event that the terms and conditions of members were cut in the wake of the court ruling.

He said union officials would meet members in each workplace over the coming weeks to discuss the ruling. A protective ballot for a mandate for industrial action would be carried out, which would be used in the event of an employer cutting the terms and conditions of members. This ballot is likely to be concluded in September or October.

Mr Kavanagh said the union would strongly oppose any move not only to cut pay of existing workers but also that of personnel hired in the future.

He said the union argued that in addition to terms set out in sectoral employment orders, there were also national agreements in the background which set rates for the job.

Mr Kavanagh said any move to cut pay for one group of workers could see sites brought to a complete halt.

“If carpenters have their pay cut, others members will not pass pickets on a site and this will bring out plumbers, electricians or engineers. “

Connect wants the Government to appeal the High Court ruling and in the meantime to seek a stay on its implementation.

Meanwhile the Labour Party on Thursday published draft legislation which, it said, would see the terms of the three existing (purported) sectoral employment orders – electrical, construction and mechanical engineering – given the full force of law through a short Act of the Oireachtas.

Labour employment spokesman Ged Nash said: “The High Court found the way in which the electrical sectoral employment order had been given effect by the signing of a Statutory Instrument by the Minister and its subsequent approval by both Houses of the Oireachtas to be in conflict with the Constitution.

“In order to fix this urgent matter for the tens of thousands of workers and all of the businesses that were covered by these Orders, we are proposing, in essence, that this defect be addressed by converting the terms of the three purported Orders into primary legislation that would have to be debated and adopted by the Dáil and Seanad in the normal way.”

Mr Nash said the High Court judgement had had “a chilling effect” on the conduct of industrial relations in the country.

“I wrote yesterday to the Minister for Business [Heather Humphreys] to urge her to immediately appeal this ruling to the Supreme Court, ” he said .

1 Why are markets booming when a crash is on the way?
2 How much do Irish people earn? And what will Covid-19 do to our wages?
3 Could your old car be giving away all your secrets to its new owner?
4 Dunnes Stores trials online ordering from Cornelscourt outlet
5 Permission sought for €150m film and media campus in Wicklow
6 Up to 400 jobs saved in Cavan as MML takes stake in CG Power Systems
7 Galway Clinic gets orders dismissing action over board decision
8 Covid-19: Publicans and restaurateurs row over calls for VAT cuts
9 Innovation hubs keen to get show back on the road
10 AIB U-turn on mortgage block for those on Covid wage subsidy
Real news has value SUBSCRIBE