With ATM out of order, Athlone decides it is time to strike out alone 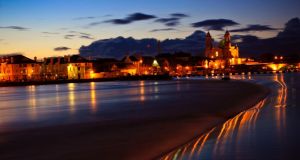 Athlone should get an indication about how the Government feels about its bid for regional city status in coming months, when the first draft of the National Planning Framework is approved by Cabinet and put out for consultation.

But the town, right in the centre of Ireland, has been here before.

There was talk of potential city status for Athlone more than 15 years ago as part of the last National Spatial Strategy. Instead, Athlone got lumped in with Tullamore and Mullingar as the “ATM” gateway region for the midlands. It is now widely acknowledged that the ATM model failed. Athlone wants to strike out on its own.

Destination Athlone, the steering group that is driving Athlone’s bid, grew out of a tourism industry collaboration set up four years ago, which now also incorporates public-sector groups and private-sector operators across many sectors.

Taking the successful development of Westport as inspiration, they are banking on a collaborative approach to secure city status. This, they hope, will spur public investment, which would in turn lead to more private investment.

There was a perception in the past that Athlone suffered from a lack of co-ordination between the two county council regions it straddles. Martin Lydon of Roscommon County Council and Pat Keating of Westmeath County Council, both active in the Destination Athlone group, say their local authorities are now firmly behind the bid for city status.

Roscommon council is progressing plans for a new innovation centre in the Monksland area of Athlone, which it hopes will boost commerce from the west side of town. Lydon says Roscommon councillors have “unanimously” backed Athlone’s city bid: “For the first time, we are looking east, rather than west.”

Keating says he believes Athlone has “the best chance” out of any of the midlands towns of fulfilling the Government’s mooted ambition of developing a new city in the region. Other areas, such as Portlaoise, may also be in the running, however.

For the business sector, the bid for city status is seen as crucial for attracting investment to Athlone. John O’Regan, a senior executive with one of the biggest local employers, telecommunications manufacturer Ericsson, says it would help the company attract and retain the best engineers, which he said is vital for the company’s growth.

Destination Athlone’s chairman, the Hodson Bay hotelier John O’Sullivan, is hoping for an indication from Government before the end of the year.

“The midlands region has to have a centre. We feel it has to be us,” he said.