What agriculture can learn from Charles Darwin 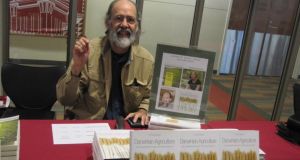 R Ford Denison: the professor of ecology, evolution and behaviour at the University of Minnesota 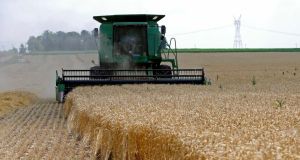 Harvest time: innovations will be needed as the global demand for grain is expected to increase by 40 to 60 per cent over the next 30 years because of population growth and other trends. Photograph: Reuters/Jim Young

Can agriculture learn any lessons from Charles Darwin? Most definitely, according to R Ford Denison. The professor of ecology, evolution and behaviour at the University of Minnesota has written a book on the subject and next Monday, he will deliver a lecture on it in Dublin as part of Teagasc’s annual distinguished lecturer series.

Denison says Darwin’s best argument for the power of natural selection was borrowed from agriculture, specifically the success of plant and animal breeders in improving crops and livestock simply by selecting which plants and animals get to reproduce.

He says these innovations will be needed as the global demand for grain is expected to increase by 40 to 60 per cent over the next 30 years because of population growth and other trends. Agriculture now accounts for up to 80 per cent of our water use and 35 per cent of the world’s ice-free land surface so we can’t keep increasing food production by using more land and water for agriculture. Instead of more irrigation and forest clearances, he says we need to be more efficient in the way we use resources.

This includes increasing the ratio of food produced to water used and this is where many people turn to biotechnology and the addition or adaptation of certain genes. But he believes that advocates of biotechnology are forgetting about Darwin and the implications of past evolution.

“Our crops were only domesticated in the last 10,000 years or so but they’re descended from wild species that were exposed to natural selection for billions of years,” he says.

Denison cites the example of a gene that is linked with drought tolerance. “So we make a little change in the plant, maize for example, so there are more copies of the protein made by this supposed drought-resistant gene,” he says.

“That’s the kind of thing that we can be pretty certain that over the million-year history of maize there must have been mutants that arose that made more copies of that protein. We know that the ancestors of our maize competed against mutants that had more of this drought-resistant protein and those mutants lost in the competition because our maize inherited more moderate levels of that protein.

“If what we are trying to do is to recreate something that lost over and over again in past competition against the genotype that we have now, what is it that makes us think that this is actually an improvement?” he asks.

He believes some of the expected short-term benefits of biotechnology have been exaggerated and says biotechnology is unlikely to deliver soon on crops that use less water while yielding more grain. Denison warns of a “biotechnology bubble”, saying massive funding is going on this research while research on ecologically-inspired ways of improving agriculture is starved of funding.

He believes some of those resources should be directed towards areas such as agricultural ecology, plant breeding and soil microbiology.

“Agricultural innovations inspired by nature seem more promising than many of the approaches currently being pursued by biotechnology.”

He points to the Green Revolution which happened between the 1940s and 1960s, which used research and development to increase agricultural production. Much shorter wheat and rice varieties were developed.

“That meant that those varieties, rather than putting all their energy into a tall stem, were putting more energy into making the grain that we eat so they had substantially higher yields and that made a big difference to a billion or so people who might have otherwise starved to death,” he says. “And just as plant breeders reversed past evolution to make shorter, higher yielding plants, they can reverse past evolution to make plants that would use water more efficiently. It would be a genetic change which, if we understood all of the inner details of how plants work, could be done through biotechnology . . . or you could use various selection methods for identifying plants that are using water most efficiently.”

He also has some interesting views on the links between reproduction and life span which he says are “more speculative but exciting if they turns out to be right”.

Denison says there is a trade-off between early reproduction and life-span. “So for example, in macaque monkeys, the females that give birth early don’t live as long and that tends to be true of humans although it’s much more complicated in humans. So if there’s a trade-off between early reproduction and living a long time, which will evolution go for?

He says if people are eating bitter tasting leaves such as kale, it sends their bodies a cue that suggests a food shortage. “This suggests the population is going to go down.” On the other hand, a couple of studies have shown negative effects on diabetes-related conditions from diet drinks.

“So they are not getting any calories but they are getting the sweet taste. So our hypothesis to explain that, if it turns out to be true – and this is far from certain at this stage – if you are eating something sweet that probably means the conditions are good and the population is growing and so you better reproduce early.”

This could help to explain the link between chocolates and courtship.

“But all this needs to be tested more thoroughly before I would tell people to stop eating meat and eat kale so they’ll live a long time.” Prof R Ford Denison will deliver his lecture entitled, Darwinian Agriculture: Evolutionary Trade-offs as Opportunities, as part of Teagasc’s Distinguished Lecturer Series, in the Round Room at the Mansion House, Dublin at 6.30pm on Monday, March 23rd.