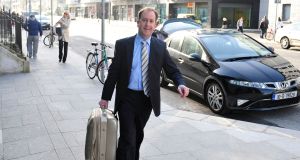 Alan Hynes in 2014: this week his membership of Chartered Accountants Ireland (CAI) was revoked and costs of €550,000 confirmed against him. Photograph: Aidan Crawley

“Cunning, clever and conniving”, is how financial broker John Power described accountant Alan Hynes at his original disciplinary tribunal in 2014. Power said Hynes’s actions had caused a series of consequences for clients, including at least one bankruptcy.

The Wexford accountant left a raft of destruction in his wake arising out of a failed property scheme that goes back more than a decade. Hynes this week had his membership of Chartered Accountants Ireland (CAI) revoked and costs of €550,000 confirmed against him in relation to disciplinary hearings dating back to February 2014.

This case has dragged on for 12 years, with Hynes delaying the appeal tribunal right up until the end. His actions ultimately led to 130 tenants being evicted from rental accommodation, retirees being sued for more than €16 million, and small-scale investors losing their life savings.

It began toward the end of the Celtic Tiger property boom when Hynes created a property investment and development business, Tuskar Asset Management Plc. When it collapsed into liquidation in 2009, Tuskar had debts of €50 million.

About 80 investors put money into the vehicle, almost half of whom had been clients of Hynes’s advisory business, Hynes & Co Financial Consultants Ltd, now in liquidation.

Some were medical and dental professionals entering the finishing straight of their careers, but the majority were described as “ordinary people” by one source.

Ambrose O’Brien, of Kilcloon, Co Meath, first met Hynes in the Shelbourne Hotel, Dublin, in mid-2004 along with a friend, he told the Chartered Accountants Regulatory Board’s (Carb) disciplinary hearing in 2014.

After selling a house in Rathmines, Dublin, O’Brien had €800,000 he wanted to invest. Those initial funds were used for a Dalkey development on Cunningham Road. O’Brien subsequently invested €300,000 for a one-third share of another Dalkey apartment development, in addition to €100,000 in a proposed scheme in Maynooth, Co Kildare.

O’Brien didn’t realise the extent to which his initial investment had turned sour until he began receiving letters from Zurich Bank. Having invested €1.1 million, O’Brien ultimately ended up bankrupt with net debts of about €17 million after signing powers of attorney giving Hynes the right to take out bank loans on his behalf as part of the investments he made.

“There were powers of attorney going around,” he said in 2014. They would be “emailed to me, or faxed to me, or sent to me” and it was always the case that they had to be signed and sent back within a day or two. “There was no explanation as to the seriousness of it, that you were signing your life away,” O’Brien told Carb.

Darren McCourt, an oral surgeon from Strabane, Co Tyrone, described Hynes’s scheme as a “scam” at the tribunal, and said he, too, had signed a power of attorney document in February 2006 but hadn’t understood it would be used when signing guarantees for banks in relation to the taking out of loans.

And this was how the scheme worked. By the time the disciplinary hearing rolled around, a number of investors had reared their heads to complain that the powers of attorney were used to make them personally liable for borrowings equal to their investment, without their knowing that this had been done.

Hynes dismissed any suggestions of wrongdoing, saying that investors simply “wanted to find a scapegoat”. “There is a propaganda stunt now, trying to say that Alan Hynes is the cause of it all,” he told Carb in May 2014.

In 2015, Carb concluded that Hynes committed “egregious” breaches of the CAI’s code, “unmitigated failures” in relation to his dealings with clients, and “unconscionable behaviour” in relation to clients whose money he dealt with.

The judicial review was heard in January 2018, with a judgment in Hynes’s favour in March

Carb ruled that Hynes should pay €500,000 of the costs associated with the original inquiry. On Friday, the CAI’s disciplinary appeals tribunal decided Hynes should pay an additional €50,000 relating to the costs of an appeal, which the CAI had originally denied the Wexford man.

The judicial review was heard in January 2018, with a judgment in Hynes’s favour in March. In May, the High Court awarded Hynes costs associated with the action, although no figure was placed on the costs at the time.

A series of emails and letters were exchanged between the parties. After a formal notice of the hearing was sent to Hynes, a response was returned from a woman called Aishling Furlong. She sent her email from an address connected with a person called Rachel Hynes and, in a number of instances, she signed off attaching a mobile number that was in fact Alan Hynes’s mobile number.

The original email didn’t shed much light on Hynes’s concerns, instead asking that money connected with his High Court judicial review be paid.

The Hynes side disputed that and one email signed off by Aishling Furlong said: “Is it not a requirement for the plaintiff to have costs taxed in this case.”

A subsequent email sent at 2.42am from Furlong said that if the costs payment wasn’t made before February 1st, Hynes would not be able to take part in the appeal.

On another occasion, Furlong sent an email at 8.41pm saying that Hynes wasn’t liable for tax. This prompted the case presenter, barrister Ronan Kennedy, to state at the appeals tribunal that Furlong appears to work “extremely long hours”.

This went back and forth, with the Hynes party failing to engage with the costs accountants so that they themselves could be paid. Figures ranging from €190,000 to €600,000 were claimed and, in several instances, the Hynes party asked for a cheque to be prepared and a courier sent as recently as February 7th.

On January 22nd, McEvoy, the cost accountant, wrote to Hynes’s side. “To date, costs have not been taxed so demands for payments are premature. You fail to respond to legitimate queries in relation to taxation so the taxing master will have to adjudicate,” he said.

The Hynes party claimed that they were putting down a deposit for an €18.5 million building

In an apparent effort to further slow proceedings, an email from the Rachel Hynes account said that they couldn’t continue with the appeal until the judicial review costs bill was paid in full.

Hynes’s story was muddled. On one occasion it was said that he couldn’t afford to proceed with the appeal unless the costs for the High Court action were paid. On another, the Hynes party claimed that they were putting down a deposit for an €18.5 million building, 5 Harbourmaster Place, and the costs were needed to proceed with that transaction.

“The amount of email traffic received from you on behalf of the applicant is remarkable,” McEvoy wrote in an email to Aishling Furlong on January 23rd. “I suggest your time would be better spent dealing with the fundamental queries raised.”

Hynes’s side suggested as late as January 30th – just two days before the appeal was due to begin – that the hearing was “not to be delayed”.

Kennedy, the case presenter acting for the appeals tribunal, saw the persistent and confusing email traffic as a “repeated failure to deal with the issues”.

“There are repeated demands for the payment not only of costs, but of sums by way of compensation which no tribunal has determined is due to Mr Hynes. It would appear that Mr Hynes and his representatives have engaged in a deliberate strategy to conflate the costs of the judicial review to the matters with which the tribunal has to determine in the context of the appeal.

“As you have observed, Mr Chairman [Anthony Aston], it has been clear for a number of months if Mr Hynes wished to progress the costs issues that the manner to do that was to proceed to taxation; he has failed to do so and he has even failed to furnish basic documentation required by the cost accountant appointed by the institute [CAI] to deal with these matters,” Mr Kennedy said.

It was ultimately decided that the tribunal should adjourn until February 4th. That session revealed yet another tranche of emails that attempted to explain why Hynes wouldn’t be attending the appeal.

“The respondent should not attempt to contact the appellant until the solicitor confirms the order of the High Court has been satisfied. We will wait until 5pm on Monday [February 4th] for the courier to collect the cheque from the appeal as per the order,” an email signed by Aisling Furlong and sent at 7.07am on February 2nd stated.

“Hynes has shown a marked reluctance to engage in this process,” Mr Kennedy said of the string of emails. “If Hynes wished to apply for an adjournment on the basis that he couldn’t obtain representation, it was open to him to do that in advance of the hearing.”

Hynes didn’t seek to have the hearing adjourned, simply muddying the waters with a range of emails.

At every turn in the appeal process, Hynes chose not to engage and, ultimately, the tribunal dismissed his appeal and confirmed its earlier decision to revoke his membership.

When contacted for comment by The Irish Times this week, Hynes requested that we cease sending him emails and remove him from our address book.

However, an email sent on February 7th to the registrar of the appeals tribunal from the Rachel Hynes email signed by Aishling Furlong at 7.54am was copied to The Irish Times.

Hynes will turn 50 on Monday, with little to celebrate in professional terms

The Rachel Hynes email address was sent from a company called Tuskar Partnership, which has a website detailing a commercial property portfolio including a jewellery shop, a clothes factory and a pub.

“As you aware [sic] TPHL is currently bidding for another property in the IFSC and the length of time that it is taking to resolve the cost issue is holding up that process,” the Aishling Furlong email said.

Hynes will turn 50 on Monday, with little to celebrate in professional terms. The past 12 years of his life have been dogged by the Tuskar issue, and an email read out at the appeals tribunal suggested that the Director of Public Prosecutions was reviewing the entire affair. The DPP declined to comment on this.

There might yet be more chapters to this long-running saga.