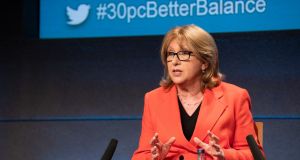 The 30% Club Ireland, an organisation that promotes better gender balance throughout Irish businesses, has made Mary McAleese and Martin McAleese its joint patrons.

The announcement of Prof McAleese, the former Irish president, and her husband Dr McAleese, who is chancellor of Dublin City University, as patrons was made at the 30% Club Ireland’s annual conference for chief executives and chairpersons in Dublin Castle today.

Research published at the conference suggests that seven in 10 members of the organisation believe they are well prepared for the implementation of proposed new gender pay gap reporting requirements, with only 11 per cent saying it might pose a problem for them.

“ Martin and I have always worked as a partnership and supported each other throughout our careers. Becoming patrons of the 30% Club to promote gender diversity is something we are both equally passionate about,” the former president said.

Carol Andrews, who leads the 30% Club in Ireland and is managing director of BNY Mellon Ireland, said the patronage illustrated the standing that the organisation and its aims now have.

The organisation first launched in Britain in 2010 and expanded five years later to Ireland, where more than 225 large employers have signed up to its mission.