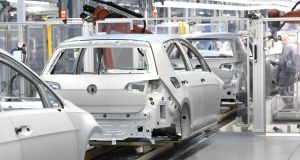 VW Golf cars are pictured in a production line at the plant of German carmaker Volkswagen in Wolfsburg. Photograph: Fabian Bimmer/Reuters

Volkswagen faces production stoppages next quarter due to bottlenecks caused by new lab tests for emissions and fuel consumption, and will discuss the implications for workers in the coming days, it said on Wednesday.

Europe’s largest automaker said that adapting to meet the new Worldwide Harmonized Light Duty Vehicles Test Procedure (WLTP), which is based on real-driving data rather than theoretical scenarios, would require “a feat of strength.”

Carmakers are rushing to get models through WLTP tests on a limited number of exhaust emission test benches as they won’t be able to sell new vehicles after September 1st without the testing. At the German company’s VW brand alone, more than 200 models require new emissions and fuel economy readings, it said.

Production at the main Wolfsburg plant, which employs 62,000 staff and builds the Golf, Tiguan and Touran models, will be halted on certain days in August and September, group chief executive Herbert Diess told a staff gathering.

“We will only build vehicles in Wolfsburg after the (July 7th to 27th) works holiday that fulfil the new standards,” Diess said.

Works council chief Bernd Osterloh called on management to find ways to cope with the effects of production disruptions, saying they couldn’t be blamed on staff.

“It’s not the fault of our colleagues that the company has built too few test rigs over the years and can suddenly not handle the test volume required,” Osterloh said. “We will not allow this burden to be borne by the workforce alone at the end of the day.”

Volkswagen’s sports-car brand Porsche last week said it would temporarily limit the number of models it sells in Europe due to the switch to WLTP standards, without being more specific.

When publishing its detailed 2017 financial results in March, the VW brand listed WLTP among the potential risks for 2018, alongside the costs for its electric-car programme and regulations to curb carbon dioxide (CO2) emissions. – Reuters

1 Bank leaked my loan request to family who tried to rip me off
2 Ryanair and Aer Lingus monitor impact of coronavirus on travel to Italy
3 Boris Johnson's new immigration regime will damage much more than industry
4 Exposed to coronavirus: How Irish business is coping with fallout
5 Beau Lotto: How to rewire our brains to spark innovation
6 Five ways to create a culture of innovation in the workplace
7 Artomatix buyer revealed as Unity Technologies
8 Billionaire Zara founder and German funds vie for prime Dublin offices
9 Will Avolon find itself on the block as China prepares to seize troubled parent HNA?
10 Doing the business
Real news has value SUBSCRIBE