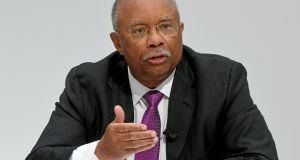 Nearly three years after Volkswagen admitted to a vast emissions cheating scheme, the company has only just begun to take steps necessary to prevent future scandals. That was the main takeaway from a report issued on Monday by a prominent US lawyer appointed to monitor the company’s behaviour. Among other things, Volkswagen still has work to do to create an adequate whistleblower programme, the lawyer, Larry D Thompson, wrote in the report.

In interviews before the report was issued, Mr Thompson said it was not intended as a criticism of the company but rather to offer recommendations for future action. “My mandate is a forward-looking one,” he said in Wolfsburg, Volkswagen’s base. Still, the implication was that Volkswagen has made insufficient progress toward repairing the shortcomings in company culture and internal controls that led to one of the biggest corporate scandals ever.

“It is not easy to come from shock to shame to change,” Hiltrud Werner, a member of Volkswagen’s board responsible for integrity, said at a news conference. But she said the company has made more progress than it might appear. “There is a lot that might not have been seen from the outside, but the effort from inside is really tremendous,” she said.

Volkswagen has admitted programming millions of diesel cars to deliver acceptable emissions only when engine software detected that they were being tested. At other times, they polluted far above legal limits. After Volkswagen pleaded guilty in a US court to charges that included conspiracy to violate the Clean Air Act, a federal judge appointed Mr Thompson to monitor whether Volkswagen is keeping promises it made as part of its plea deal and when it settled civil cases.

If at the end of this three-year term Mr Thompson concludes that Volkswagen has not done enough to avert future wrongdoing and create a stronger sense of ethics, the company might land back in US courts. Mr Thompson’s report identified two relatively minor violations by Volkswagen of the settlement terms. In one case, Volkswagen neglected to put required compliance information into a handbook for US managers, and in another Volkswagen failed to notify California regulators of impending emissions tests, as required.