Norwegian Air gets additional creditor protection to deal with debt 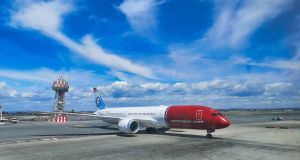 Norwegian Air was given additional creditor protection by a court in Norway on Tuesday on top of that granted by an Irish judge on Monday, allowing the cash-strapped airline’s restructuring efforts to continue.

“A supplementary reconstruction process under Norwegian law will be to the benefit of all parties and will increase the likelihood of a successful result,” chief executive Jacob Schram said.

Norwegian said it could now move forward with the dual-track process.

The company, which helped transform transatlantic travel, expanding the European budget airline business model to longer-haul destinations, has been forced to ground all but six of its 140 aircraft amid the Covid-19 pandemic.

If successful in convincing creditors and owners of its future potential, Norwegian could, with the help of the courts, emerge as a smaller but more efficient carrier with fewer aircraft, less debt and more equity.

“Our aim is to secure jobs in the company and to contribute to securing critical infrastructure and value creation in Norway,” Mr Schram said.

The airline, which has said it could run out of cash by the end of the first quarter of next year, aims to complete the debt restructuring by February 26th.

While Norwegian’s major aircraft-owning subsidiaries are Irish, the parent company Norwegian Air is registered in Norway, and the company had told the Dublin court it could seek additional court protection.

“We will now concentrate on working towards our goal of reducing company debt, reducing the size of our aircraft fleet, and ensuring that we are a company that investors will find attractive,” Mr Schram said.

“We will be ready to meet the competition for customers after the Covid-19 pandemic,” he said.

The High Court in Dublin on Monday said it had agreed to protection for both Norwegian Air and its Irish subsidiaries as the entities were dependent on each other for survival. – Reuters

9 Technology really can be stranger than fiction at times