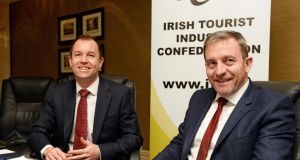 Some recent interest in Ireland as a holiday destination appears to be driven by terrorist attacks elsewhere in Europe, a representative body for the industry has said.

“One of the upsides of the current environment has been, and this is an awkward one to talk about, but the terrorist attacks across Europe have driven business to northern Europe from southern Europe,” said Irish Tourist Industry Confederation (ITIC) chairman Paul Gallagher.

“In northern Europe, Ireland has been one of the main beneficiaries of people feeling insecure because it’s very secure here . . . Obviously we would wish for no more attacks and for everywhere to be safe but that’s the environment we live in.”

Mr Gallagher also said a lack of hotel accommodation in Dublin, which is often at 90 per cent capacity, threatened to put a “hand brake” on expected growth, and he cast doubt about the potential for Airbnb to continue to pick up the slack.

“It [Airbnb] has its place. We would be cautious that most of it would be unregulated. In fact all of it is unregulated, both in terms of health and safety and in terms of being inspected by way of regulation by Fáilte Ireland.

“I’m not sure how tax compliant that whole system is but they’re matters that the Government will look at,” he said, adding that the ITIC would be “having conversations” with both Revenue and Fáilte Ireland on Airbnb.

In its newly-published vision for the Irish tourism industry the ITIC accuses the Government of a lack of ambition regarding its targets for the period to 2025, saying the sector could grow in value by €2 billion rather than €300 million with the right stimulus and increased capital expenditure.

It said growth of that nature could create an extra 50,000 jobs on top of around 230,000 already supported by tourism.

At the unveiling of the ITIC review of 2016, both the organisation’s chairman and chief executive expressed “major concern” about the impact of Brexit on a sector that has experienced successive years of strong growth.

This year set new records with 8.8 million overseas visitors, 10 per cent more than in 2015, and a similar increase in visitors’ expenditure which amounted to an estimated total of €4.7 billion for 2016.

The tourism confederation is anticipating further growth of up to 5 per cent in the number of overseas visitors to Ireland in 2017, but this is potentially threatened by the developing diplomatic situation between the UK and the EU, and by extension Ireland.

“The idea of an ending of the common travel area and the reimposition of a border would be detrimental to Irish tourism,” said ITIC chief executive Eoghan O’Mara Walsh.

Mr Gallagher added: “Tourism Ireland is an all-island tourism body. What will that look like if we have a hard Brexit? That will probably have to be reorganised. That would be difficult for everybody.”