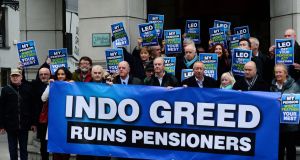 The proposed changes would impose sharp cuts on pensions which were already reduced by 40 per cent in 2013. Photograph: Cyril Byrne

INM plans to wind up two retirement schemes whose benefits are tied to workers’ pay in a move that would impose sharp cuts on pensions already reduced by 40 per cent in 2013.

The trustees, led by chairman Michael Doorley, and their lawyers and actuaries gave the union leaders a confidential briefing on their position.

Speaking afterwards, Mr Dooley reiterated both unions’ concern at the way in which INM treated the trustees, whom he said had assured the meeting that they had not concluded talks with the company and were continuing to explore all options.

“The failure of the company to honour an agreement reached with the trustees and the Irish Pensions Board in 2013 has grave consequences for scheme members,” Mr Dooley said.

INM has said that it never intended to renege on that agreement and that it will continue pay €11.1 million a-year to pensions up to 2023.