Threat of further Ryanair strikes after inconclusive talks with union 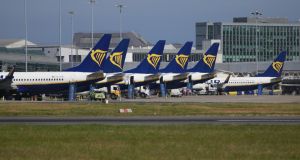 Ryanair said it had re-accommodated customers booked on 30 cancelled Ireland-UK flights and indicated it expected little disruption outside that.

Further strikes at airline Ryanair remain a possibility as talks with its Irish pilots’ union ended inconclusively on Wednesday.

Members of the Irish Airline Pilots’ Association (Ialpa) employed by Ryanair will strike on Thursday, forcing the carrier to cancel up to 30 of 290 flights in total.

Both sides indicated a willingness at the talks to set up a working group to deal with the issues raised by pilots, which include base transfers, promotion, leave allocation and other areas covered by seniority.

However, Fórsa spokesman Bernard Harbor said afterwards that they failed to agree terms of reference for this group, as both sides came up with conflicting proposals.

“Management wanted it to cover a much broader range of issues than the pilots,” he explained. “We wanted them to deal specifically with these issues.”

“But certainly there is some glimmer of hope that both sides could see a way to address this problem,” Mr Harbor added.

He said there were gaps between the Ryanair Pilots’ Council and the airline.

“However, we believe this working group can work together in resolving these matters quietly in the best interests of our pilots and our customers,” he added.

Mr Wilson’s letter indicated the group would meet fortnightly, but Fórsa said the sides had not scheduled further talks.

Mr Harbor told reporters this would have to be re-examined after Thursday’s strike, which both sides conceded would go ahead before they met on Wednesday.

“We have a job of work to do in organising the strike and they have to deal with cancellations and re-accommodating people,” he said.

Ryanair said it had re-accommodated customers booked on 30 cancelled Ireland-UK flights and indicated it expected little disruption outside that.

The remaining 260 or so flights that are unaffected are destined mainly for holiday destinations in Europe, a key part of the airline’s business at this time of year.

Mr Harbor said the union was comfortable with the fact that the strike would cause only minimal disruption, as this still involved a cost to the airline. Ryanair said any customers who have not received email or text notifications of flight cancellations should travel to their departure airport as normal.