While bus tourism in Doolin brings throngs of tourists - and threatens the rural feel the tourists come to see - other parts of the State struggle by not fitting neatly into the Wild Atlantic Way or Ireland's Ancient East. Video: Mark Paul, Kathleen Harris 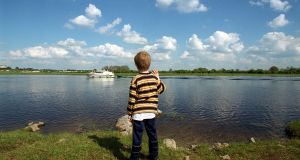 Some of the larger boats on the Shannon cost upwards of €2,000 to hire weekly in high season. Photograph: Bryan O’Brien 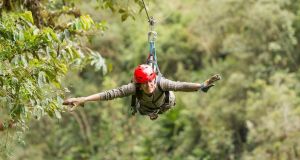 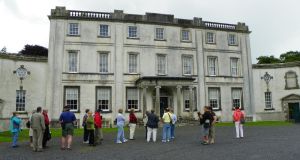 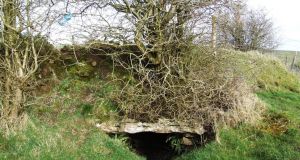 Oweynagat cave, near Tulsk, Co Roscommon, is associated with the origin of Samhain. 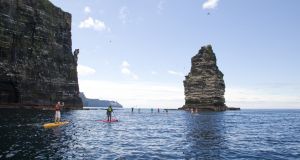 Doolin is one of the busiest spots on the western seaboard, due to its proximity to the Cliffs of Moher.

If the Wild Atlantic Way has revitalised parts of the northwest and the east coast hopes to emulate that success with Ireland’s Ancient East, what about those parts of the State that don’t fit neatly into this two-brand strategy. This includes areas such as the river Shannon region or the utterly neglected – from a tourism point of view – county of Roscommon. It faces being left even further behind as the hotspots on its flanks suck up all the State’s marketing spend.

There are other areas that, while still stunningly beautiful and commercially successful, have become so thronged with tourists that it threatens the rural feel the tourists come to see. Doolin in Clare, towards the busier southern side of the Wild Atlantic Way, is in this category.

Roscommon has no full-time tourist officer, little State support, but seemingly a whole pile of potential if only it could be tapped. Strokestown-based Eugene Murphy, a Fianna Fáil TD for the area, wants more government investment to help tourism revitalise the county, which has little else apart from farming.

“We have lakes, we have walking trails, we have ancient sites – the potential is there,” said Murphy. “Elsewhere, they get State marketing and product support, but we need it more.

“The benefits of tourism need to be more evenly spread. This could be one of the best counties for tourism if only we got the help to develop it.”

Murphy took me on a tour of the tourism sites of Roscommon. Rathcorgan, near Tulsk, is the ancient capital of Connacht – a largely unearthed archeological treasure trove that is older than Newgrange and larger than Tara.

Mike McCarthy, guide at the visitor centre in Tulsk, says it caters for more than 30,000 visitors annually. He described a nearby site, Oweynagat cave, which is important in mythology, as “Ireland’s hellmouth”.

“It is associated with the origin of Samhain. This cave is essentially the birthplace of the feast of Halloween,” he said. Halloween is almost as big as Christmas in the United States. The potential to attract US tourists here on day trips from the Wild Atlantic Way is obvious.

A 10-minute drive down the road is Strokestown Park House and Famine Museum, one of the county’s major attractions. General manager John O’Driscoll says it attracts 50,000 visitors annually and it has plans to expand through better use of the surrounding gardens and parkland.

Roscommon lacks good accommodation. Tom Greally’s four-star Abbey Hotel in Roscommon town is by far the best hotel in the county. If farmers were incentivised to open up bed-and-breakfast rooms or self-catering chalets, a thriving rural accommodation network, similar to the Italian “agriturismo” scheme, might flourish.

The Coillte-owned Lough Key Forest Park near Boyle, easily the biggest tourism attraction in the county with 200,000 visitors, shows that if tourism investment is properly managed it can generate results. A new marina, visitor centre and a range of attractions such as ziplining have been developed in the 900-acre park in recent years, through a combination of State and private funding.

General manager Louise Fitzpatrick says the local area does not have sufficient population to generate the number of visitors required to help the park thrive: “We need to try everything possible to get visitors from outside the region down here. We need the numbers if we are to to open all year round.”

About 120km south of Boyle is Banagher in Co Offaly, a mainstay of the boat hire industry on the river Shannon. Morgan Smyth and his sister Barbara run the Silverline Cruisers business from the local marina. Silverline rents boats to tourists from its fleet of 40 cruisers. Some of the larger boats cost upwards of €2,000 to hire weekly in high season.

Smyth says business is up “about 10 per cent” this year. Silverline is heavily reliant on German-speaking markets, which account for 70 per cent of its business.

“It’s difficult for us to lengthen our season because this part of the Shannon floods in winter,” he said.

Boat hire companies that cater to tourists are not eligible for the special 9 per cent tourism Vat rate. Steve Conlon of the Irish Boat Rental Association, which represents the leading hire companies on the Shannon, has lobbied government over the issue, to no avail.

Banagher ostensibly sits within the Ireland’s Ancient East bailiwick, but Conlon is concerned the unique attributes of boat hire on the Shannon are being clouded out within the Ancient East brand. He would like to see Fáilte Ireland develop a sub-brand especially for the Shannon.

“Only 17 per cent of our members’ business is domestic. We are predominantly an export-oriented activity. We need an appropriate brand of our own to promote this natural asset. It would pay off,” said Conlon.

‘Doolin is a fantastic town’

Leaving Banagher and heading 112km southwest, back towards the Wild Atlantic Way and Doolin in Co Clare.

Doolin is one of the busiest spots on the western seaboard, due to its proximity to the Burren and the Cliffs of Moher. An already busy little village has had its capacity tested by the success of the Wild Atlantic Way and preponderance of coach day tours from Dublin and Galway.

Anthony Moloney runs the Doolin Hostel, which he took over from his parents in 2012 when he returned from abroad with his wife. His sister runs a bed and breakfast behind the hostel, while his brother runs another B&B 50 yards up the road, next door to their parents.

Moloney was formally trained at Shannon School of Hotel Management, and worked at five-star properties abroad before returning to his roots to revamp the hostel. He tore out the dorms, replaced them with comfortable, mostly private rooms, and recalibrated the hostel experience to be more like a small hotel.

“Doolin is a fantastic town. It’s my home. I travelled the world only to find out that what I was looking for was right here all along,” he says.

Although the hostel is busy, Moloney says it still needs the 9 per cent VAT rate. The reduction in the rate from 13.5 per cent provides him with an extra 4.5 percentage points straight to his bottom line, which he uses to finance expansion and investment.

Moloney is proud of Doolin, but worries about the effect of the bus day tours that bring traffic to a halt on the narrow roads every afternoon. They clog up the town, then leave for Dublin or Galway again.

Joan Hamilton Reilly of Doolin2Aran ferry tours says the improved signage of the Wild Atlantic Way has been of huge benefit to tourism but she, too, worries that the town is now becoming a victim of its own success.

“We’re hitting capacity earlier in the season. The coaches are causing huge infrastructure problems,” she said.

Being too busy, as Doolin often is, is a nice problem to have. But it is a problem nonetheless.