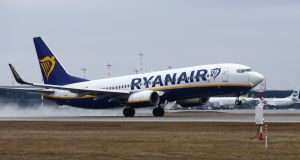 Analysts at stockbroker Davy believe Ryanair’s share price could increase back to €15 as the airline increases its share of the European market and changes its structure to cash in on new opportunities.

Ryanair shares closed at €11.785 on the Irish Stock Exchange on Thursday, a slight increase of 0.34 per cent over the previous day.

Davy analysts Stephen Furlong and Ross Harvey published a note on the airline saying that the broker had increased its price target of the company to €15. They argue that the current price fails to reflect Ryanair’s capacity to grow and its potential to generate cash.

The analysts say that Ryanair’s low costs give it a significant advantage over rivals. Also, based on the fact that it has outgrown the market in 14 of the last 15 years, they expect it to increase its share of European air travel to 16 per cent this year from 15 per cent in 2018.

1 State’s biggest landlord records 30% rise in rental income
2 What will the office market look like after the great remote working experiment?
3 Irish tourism must also help itself to survive the pandemic
4 Facebook agrees Irish wind farm deal with Brookfield
5 ‘Saudi Arabia is where the opportunities will happen in future’
6 Trump signs executive orders banning TikTok and WeChat
7 Project Eagle: What was it and why is it in the news?
8 Marlet secures €65m from AIB for Dublin docklands build-to-rent scheme
9 How your country’s history affects the way you think
10 Two men face fraud charges over £1.2bn sale of Nama’s NI loans
Real news has value SUBSCRIBE