State ownership of airlines may be side effect of coronavirus 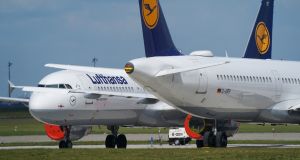 Lufthansa’s €9bn state bailout will be the biggest aid deal offered so far by a European government to an airline grounded by pandemic restrictions. Photograph: Sean Gallup/Getty Images

Coronavirus travel bans might be about to turn European aviation’s clock back almost 30 years, reintroducing state ownership of airlines. Germany’s government this week pledged €9 billion to Deutsche Lufthansa, in return for a 20 per cent stake in the country’s former flag carrier.

If – as seems certain – it goes through, it will be the biggest aid deal offered so far by a European government to an airline grounded by pandemic restrictions. The €9 billion does come with strings attached. The European Commission wants Lufthansa to surrender plum slots at Munich and Frankfurt airports to help level the playing field with rivals.

And the German government, led by chancellor Angela Merkel, says Lufthansa must still “right-size” its operations, a polite way of telling the airline to axe jobs. Nevertheless, these terms are unlikely to placate Ryanair chief executive, Michael O’Leary, who is incandescent at the prospect of his company’s rival getting €9 billion from any government.

By O’Leary’s calculation on Tuesday, Lufthansa and its subsidiaries are seeking aid totalling €11.3 billion from governments in Germany, Switzerland, Belgium and Austria. Last week, he estimated that it could end up with €12.4 billion.

Ryanair is not opposed to wage supports, as these are equally available to all carriers. But it argues that the backing offered to Lufthansa and others is illegal, will distort competition and vows to challenge all such deals in the EU’s courts.

It is already appealing tax holidays offered by France and Sweden to airlines registered in those countries.

O’Leary’s anger is understandable. Ryanair ended its financial year on March 31st with €3.8 billion in cash, enough, according to industry analysts, to weather a complete grounding of its fleet for 18 months without borrowing. By contrast, those same analysts calculate that Lufthansa and Air France – which could get up to €10 billion in government backing – would only survive three to six months without state aid.

So aid penalises carriers such as Ryanair that have run their businesses efficiently while carefully husbanding shareholders’ money.

O’Leary cannot be the only airline boss annoyed by this. Willie Walsh, Irish chief executive of Aer Lingus, British Airways and Iberia owner, International Consolidated Airlines’ Group (AIG), which has €10 billion available to it, and is not receiving aid, must be similarly put out.

EasyJet’s Johan Lundgren should also be peeved. His organisation has about €2 billion in the bank, but is unlikely to get government support.

While neither IAG nor EasyJet are heading to court, they could be cheering on Ryanair’s efforts to overturn these state aid deals. However, the European Commission has already said that it will be flexible on the competition law rules that O’Leary says Germany, France and others are breaking.

Covid-19 restrictions have inflicted huge damage on aviation. In 2019, 3.43 billion passengers passed through Europe’s airports. In April this year, the pandemic cut traffic by 300 million, 9 per cent of the 2019 total. Air travel is key to a single market that stretches from Sweden to Sicily. Tourism is worth €150 billion to the EU.

So, for now, Brussels believes that saving airlines is more important than enforcing competition law.

O’Leary believes state aid could have almost the opposite effect. He fears that Lufthansa, Air France and others will use the cash to sell flights below cost, strengthening their local monopolies by forcing less well-backed rivals off the pitch.

Of course, with or without government-subsidised low fares, a big question for airlines is whether or not they can lure passengers back. Ryanair and IAG have pegged July as a likely restart date, albeit with reduced schedules. Popular tourist destinations, Spain, Italy and Greece, are preparing to lift quarantine rules and open their borders to visitors at the same time.

Without a doubt, plenty of people who have endured tedious months of lockdown are itching to travel, but plenty more could stay home. Anyone particularly vulnerable to coronavirus could be forgiven for giving foreign travel a miss this year. Others may simply decide it’s not worth the risk.

When it comes to travelling itself, passengers face extra checks. The European Union Aviation Safety Agency and the European Centre for Disease Control last week released jointly-recommended measures to allow people to fly again. They include the already well-touted temperature checks at departure airports, observing social distancing wherever possible, wearing face masks on board and providing track and trace details.

These could result in more queues, longer periods spent in airports and general inconvenience that could put yet more people off travel. They could be particularly onerous for anyone trying to bring a young family on holiday, and they will constantly remind passengers that the risk of contracting coronavirus remains. How people adapt remains to be seen.

Given the challenges aviation faces, it remains to be seen just how well it can recover at all. The speed at which it does will be crucial to this country, an island heavily dependent on trade, tourism and mobile investment. An end to air travel as we knew it up to March would set Ireland back far more than a mere three decades.