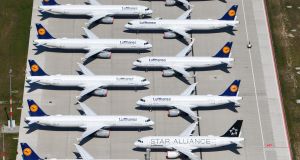 Germany’s government confirmed on Monday that it would offer Lufthansa €9 billion to aid it through the Covid-19 crisis in return for a 20 per cent stake in the aviation group.

Ryanair Holdings did not comment on the move, but the Irish group’s chief executive Michael O’Leary has already pledged that it would challenge any plans to give state aid to Lufthansa or its subsidiaries.

Dublin-headquartered Ryanair, Europe’s biggest airline group, has already asked the European Court of Justice to overturn tax packages offered by France and Sweden solely to airlines registered in those countries.

Mr O’Leary also warned that Ryanair would challenge a proposed €767 million aid deal for the Lufthansa-owned Austrian Airlines, with which the Irish group’s subsidiary Laudamotion competes.

Ryanair says it opposes such deals as they are illegal state aid under European law, but backs schemes including the Republic’s Covid-19 wage supports as they are available to all businesses, so are thus not illegal.

Along with the German deal and Austrian proposal, Lufthansa has secured credit guarantees from Switzerland for its Swiss Airlines subsidiary, and is in talks with the Belgian government about support for Brussels Airlines.

Mr O’Leary recently declared that Lufthansa was going around Europe mopping up state aid like a “drunken uncle” helping himself to unfinished drinks at a wedding.

As part of the German deal, the government, led by chancellor Angela Merkel, will pay about €300 million for new Lufthansa shares at €2.56 each, the nominal value of its stock on the group’s balance sheet.

The agreement also includes a €5.7 billion investment via so-called silent participation, a hybrid of debt and equity. In addition, the state will back a three-year loan of €3 billion. – Additional reporting: Bloomberg